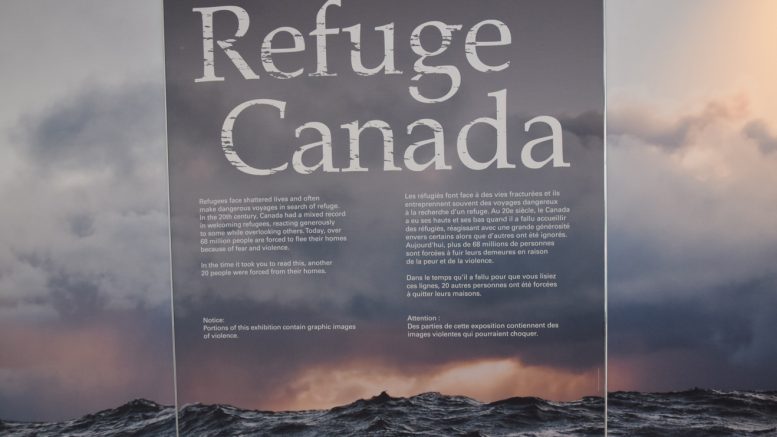 Refuge Canada, on loan from Halifax's Canadian Museum of Immigration, tells the stories of refugees arriving in Canada. The exhibit will be on display at the Lennox and Addington County Museum starting Jan. 31. Photo by Adam Prudhomme.

No one wants to be a refugee, anyone could become a refugee.

Those powerful words are what will greet visitors to the Museum of Lennox and Addington’s latest exhibit, Refuge Canada, on loan from the Canadian Museum of Immigration at Halifax’s Pier 21 from Jan. 31 to April 14. Utilizing images, soundscapes, first person accounts and artifacts, the exhibit explores Canada’s historic contributions to the global refugee crisis.

“The messaging from this exhibit is really important in the fact that it demonstrates and reflects on Canada’s role in immigration around the world as well as the acceptance of refugees into it as well as helping around the world,” said Museum of L&A curator JoAnne Himmelman, noting she had been wanting to bring this exhibit to Napanee for the better part of five years. “The message is one of hope but it also is eye opening in terms of you see both sides in how Canada has played a vital role in refugees, for good and bad. Not all stories within this exhibit are happy ones and not all the roles that Canada has played have been good ones. It’s a very truthful telling of Canada’s place within the realm of refugees as well as immigration policy.” A display of a living room that is full of bullet holes and items destroyed, providing a visual of what civilians living in war torn countries face as they live in constant fear. Photo by Adam Prudhomme.

In order to accommodate school groups, the exhibit will be open to the general public Monday to Friday from noon until 5 p.m. and on Saturdays from 10 a.m. to 5 p.m. Museum staff has also done their part to find a local angle to accompany the main exhibit.

“It has allowed the museum to share some of the local stories that have come to light and allowed us to create an exhibit from the local perspective,” said Himmelman. “Along with Refuge Canada, we’re also producing an exhibit called Helping Hands. This is L&A’s role from the museum collection’s point of view how we have helped through war times as well as other crisis from L&A. We have found stories of helping refugees through the Vietnam War from the Napanee Beaver, we have Red Cross objects that tell the story of how L&A went through the World Wars and its also allowed us to launch our very own oral history project where we’ve solicited stories from immigrants who now call L&A home.”

This latest exhibit will launch a three-month stretch of world culture programming that will be featured at the museum. All events during that span will welcome special guests who will highlight the culture of a different country.

“They’re telling the tales of their own culture and how they bring that to Canada and how they’ve adapted that for Canada,” said Himmelman. “We’re calling it March Around the World and it’s actually been a lot of fun to plan.”

For a schedule of upcoming events at the museum, visit www.CountyMuseum.ca.