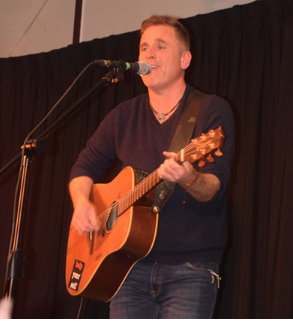 Armed with his trusty guitar Old Brown and three decades worth of songs to draw upon, Séan McCann will be stopping by Napanee’s Doghouse Studio on March 26 as part of a cross-county tour.

The solo excursion around the country is in celebration of the 30th anniversary of Great Big Sea, the Celtic-folk-rock band he helped found that would go on to become one of the biggest to ever come out of Canada. He’ll take the stage in Napanee with a set list draws upon the many GBS fan favourites, with some deeper tracks mixed in for good measure. Fittingly, the tour has been dubbed Séan McCann Sings The Great Big Songbook.

“It just kind of spiralled and turned into a bunch of people across the country who wanted to sing Great Big Sea songs again which made me happy,” McCann said, noting the tour kicks off on March 11 in Ottawa, exactly 30 years to the day four lads from Newfoundland took the stage as Great Big Sea for the first time. “I’m looking forward to it. When you look back at your life, 30 years sounds like a long time but it doesn’t feel like it’s been that long. It’s been fun. I spent the holidays listening to Great Big Sea records and re-learning old songs and it brought back a lot of pleasant memories.”

The challenge has been whittling down 12 albums worth of songs into a 20 song set list. He’s been work shopping the tunes with his wife Andrea, trying to figure out what will make the cut.

“It was a wrestling match for sure because there’s so many songs in the catalogue,” said McCann. “A dozen records is a lot of songs…our house has been Great Big Sea house for the holidays. My sons were reassuring, they’re teenagers and they’re like ‘that’s a banger dad!’ When I heard that I said ok, that’s in the list.”

Though the set list is still a work in progress, it is starting to take shape.

“What I need for a show is 20 songs. What I have, to be honest, is 40,” McCann laughs. “Hopefully that doesn’t go up. Hopefully that stays where it is. It gives me options every night and of course I will take audibles from the audience. If they want a certain song, I will do my best to deliver it.”

At its peak, Great Big Sea was selling out arenas across Canada and touring the globe as a full five-piece band. Now alone on stage, McCann counts on audience participation.

“I don’t care if I ever play a stadium or go outdoors to a big festival ever again,” said McCann. “I’ve always found them to be a bit scary and too many people. I love these smaller rooms where you can really get up close with the artist and can really feel the power of a voice and be together that way.”

This year not only marks the 30th anniversary of the band, but also 10 years since their last show together, which was the conclusion of their XX tour, marking their 20th anniversary. It was at that time McCann went public with his struggles with alcohol, stating a need to step away from touring as he addressed those demons. He’s since become an advocate for mental health awareness and the using the power of music as medicine. Sean McCann plays his signature bodhran during a show in Tamworth in January of 2019. Photo by Adam Prudhomme.

“I think it’s just taken me 10 years to be comfortable walking through those years confidently without getting triggered as an alcoholic,” McCann said of performing GBS songs. “Part of the wrestling match was moving through those things, but I’ve become much stronger. I’ve been sober over 11 years now. I stopped touring for a reason. I never left the band, I just stopped touring because I couldn’t do it anymore and it was the right decision. I was fearful of it triggering alcohol for me, and drugs. I just stayed clear of it. As you get stronger those concerns become less warranted. I’m always careful, but I’m not fearful anymore. Those songs started to seep back into my sets. I swore I’d never sing another one again and a couple years later someone is asking for it and it’s a 12-year-old girl in the front row whose mom loves the band. I’m not going to be the bad guy and I’m going to sing it.”

Having seen the music business evolve from one driven by CD sales to now one overtaken by online streaming, to paraphrase a hit GBS cover-it could be the end of live music as we know it. With artists earning a fraction of a penny for every stream, McCann says it’s harder than ever for a musician to make a living and just as hard for fans to see live music at an affordable venue. That was just one more reason he wanted to resurrect the GBS songbook on stage.

“I really believe if we lose live music and we lose live concerts, we lose a lot,” said McCann. “They’re worth keeping if we can. I do believe they’re worth exposing our kids to if we can. The way things are going, they won’t see this. The way things are moving with streaming, I don’t think they’ll be able to see small concerts and rock bands in clubs and stuff like that because their won’t be any.”

And don’t count on an XXXX tour either.

“I’m 55, I don’t know if there will be a 40th,” he said. “I’m not going to bet on that, though I’ve been pretty healthy. But I do know just my kids listening to me over the holidays, they were small so they don’t know Great Big Sea, they don’t know the kind of reach we had and the impact we had. I think if there’s any purpose to what I’m doing, aside from celebrating it myself, is to give the young people a chance to hear the songs live again. If we wait till 40 we won’t be able to find any young people who will even remember Great Big Sea.”

Tickets for the March 26 show, which gets underway at 7:30 p.m., can be found at https://seanmccannsings.com/concerts/mwtkasr1uifcycpms4u6xvyz3vuifa.