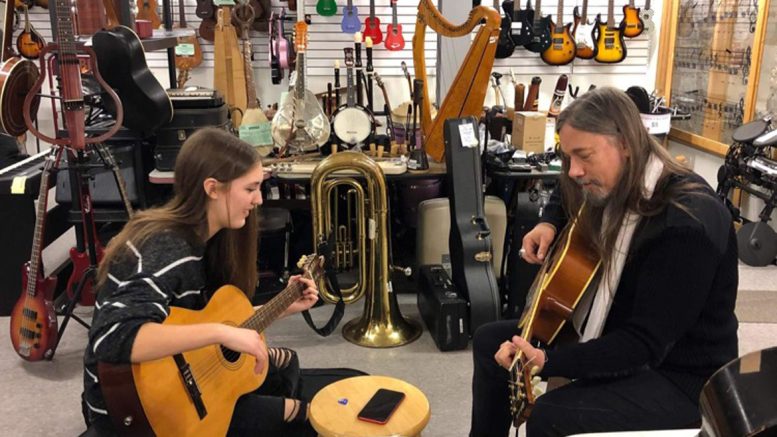 Jade Peter of Napanee gets a one-on-one lesson from Canadian rock legend Rob Baker of the Tragically Hip. Submitted photo.

Jade Peter never needed much incentive to practice her music, but when doing so gave her an opportunity to jam with rock legend Rob Baker, she was all the more determined.

The Napanee teen’s efforts were rewarded when she was the lucky winner of a raffle hosted by Kingston’s Joe’s Musical Instrument Lending Library (MILL), earning her a free one-hour lesson with Baker, guitarist for the Tragically Hip.

“You had to do 20 hours of practice in November and then your name would go into a raffle with donations for Joe’s MILL,” explained Peter. “If you donated, your name got put into a raffle and they pulled my name.”

Peter, who routinely performs at local open mics, has long been aspiring to make a career in music.

“The Tragically Hip and Rob Baker, they’ve been huge music influences for me and my family,” said Peter. “It was unreal, it was like ‘I’m actually getting a guitar lesson from Rob Baker? Oh my gosh’.”

And though it’s often said never meet your heroes, Baker did not disappoint.

“I was mostly shocked. I was super excited for my lesson and super excited to see him and it was a great experience. He was one of the sweetest musicians I ever met. He was amazing,” said Peter.

The lesson took place at the MILL.

“First off I asked for an autograph for one of my aunts because she is totally a bigger fan than I am, which is crazy,” said Peter. “We worked on Long Time Running by the Tragically Hip because it’s probably one of my favourite songs. Now I have chords and guitar tabs from Rob Baker of Long Time Running, which I think is pretty cool.”

Peter said the experience gave her renewed enthusiasm to continue her goal of turning her passion into a career.

Though she continues to perform solo on a regular basis at Belleville’s 116 Bistro, she recently help found Switzerville Sound Machine, formed as the first youth band from the Harmony Lounge and Music Club. They’ll play Hotel Wolfe Island this Saturday at 7 p.m., along with Napanee District Secondary School band Bob Shmurkley as part of Youth Gonna Rock. https://hotelwolfeisland.com/events/youth-gonna-rock-napanee-high-school-bands/.