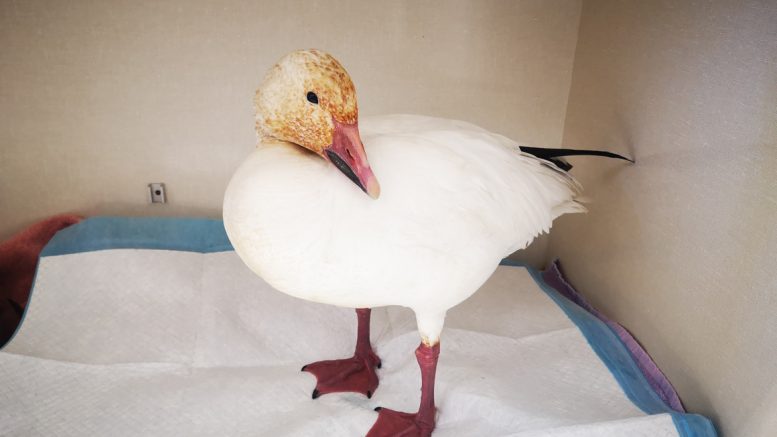 This snow goose, found separated from its flock in Cornwall and is unable to fly, will be spending the winter in the care of Napanee's Sandy Pines Wildlife Centre. Submitted photo.

During a migration of snow geese through the Cornwall area, a flock left to continue their journey while one goose stayed behind for the holidays.

In mid-December Sandy Pines Wildlife Centre in Napanee received a call from someone in the Cornwall area who had been watching a flock of snow geese that was migrating through in the fall. When the flock left there was one lonely snow goose left behind.

“The people were concerned about it so we asked them if they were able to capture it,” said medical director at Sandy Pine, Leah Birmingham. “Then we worked at getting it here because it was up in Cornwall.”

When the bird arrived it was obvious to the people at Sandy Pines that it was struggling with a minor infection and had lost some body condition, which was likely why it couldn’t fly with the rest of the flock.

“When birds migrate far distances like snow geese do, they pretty much wear themselves out in the process of trying to do so,” Birmingham stated. “I think this bird just got itself weak and exhausted and then a minor bacterial infection and now is recovering and it’s going to have to stay with us until the spring.”

Unfortunately though some of Sandy Pines diagnostic equipment is currently not working.

“We certainly had some difficulty,” expressed Birmingham. “We have been very fortunate to have over the years our X-ray machine which is currently down and we were working on that and we realized we have to get a new one. There was no fixing the one we had. A new machine, even at a discounted rate because were a not-for-profit, is going to cost us to lease it $1,000 a month to have the X-ray here. And it’s not like these are pets who come in with an owner who can tell you what’s going on, you only have the observations of the finder which sometimes can be almost none.”

The team at Sandy Pines was able to do some minor treatments for to the bird, only to determine they couldn’t find anything.

“We just did standard stuff like deworming and we did treat it with some antibiotics for a week or so and that got the fever down,” Birmingham said. “Now the bird is going to have to spend the rest of the winter with us until they migrate through again and we hope where they land for migration is back in the Cornwall area and hopefully get back with its flock and if its strong enough it will be able to make the journey with them back home.

If it can’t then we will have to figure out how to fly it back to where they would go in the summer months which would be the far north.”

This past year for Sandy Pines has been financially tough as a not-for-profit organization, as everything cost money.

“It’s really interesting to having a species you haven’t had before but it also does cost money to have the equipment we need to be able to try and determine what is going on with these animals,” said Birmingham. “Every year we are seeing more and more patients with more and more complex issues so there is still a need for us. We also do have monthly 50/50 raffles happening right now so if people check out our website or our Facebook page there will be links for that and they can stop in at the centre to get tickets as well.”