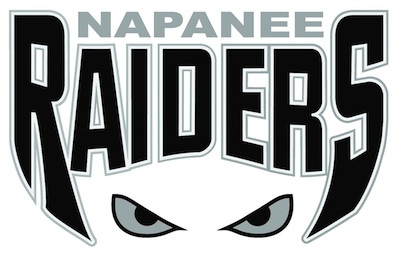 Eric Russell’s third goal of the game was the golden goal, lifting the home team Amherstview Jets to a 4-3 overtime win over the Napanee Raiders on Sunday night.

Russell scored on the power-play 3:41 into extra time, handing the Raiders just their fourth loss on the season and first in overtime. Russell’s first two goals of the game came in succession at the start of the second period, giving the Jets a 3-1 lead at the time. Nicholas Goosney and Soren Zamuner responded later in the frame to knot the game at 3-3, where it would stay through the entire third period before a winner was decided in OT. Matthew Donovan scored in the first for the Jets, offset by a goal from Napanee’s Blake Aylesworth.

Shots were pretty even with Napanee firing 32, the Jets 31. Samuel Closs picked up the win while Bailey Maracle took the loss.

Friday night at home the Raiders survived a tense finish, picking up a 5-3 win over the Port Hope Panthers.

Michael Patrick scored two goals in a span of 16 seconds to give Napanee an early 2-0 advantage. The Panthers chipped away as Connor MacGregor and Cole Kimble each netted a goal.

Napanee went ahead for good in the second when Adam Nuttall scored 3:32 into the frame. Cameron Krupa tacked on another at the 12:13 mark.

Port Hope attempted a comeback when Kieran Flynn scored early in the third, setting up a nervous finish. Napanee was able to hold on however as Ryan Kidd banked home an empty net goal in the final minute to wrap up the win, doing so while on the penalty kill.

Maracle earned the win with 39 saves on 42 attempts, which was actually more than his counterpart Sam Dingle saw, who was faced with 35 save attempts on the night.

Despite their loss to the Jets, the Raiders still enjoy a 14-point advantage over them in the standings (53-39) with a game in hand, having played 30 compared to Amherstview’s 31. Picton remains in third with 30 points in 26 games, just one up on the Huskies, though the Huskies have played 29. The Panthers have 26 points in 29 games while Campbellford sits last with four points in 27 played.

Napanee will look to get back in the win column when they host Campbellford on Friday night at the SPC starting at 7:30 p.m. In their last meeting the Rebels gave the Raiders a run, tying the game late before Napanee pulled out the victory with a late goal.

On Saturday the Raiders hit the road to visit Frankford.