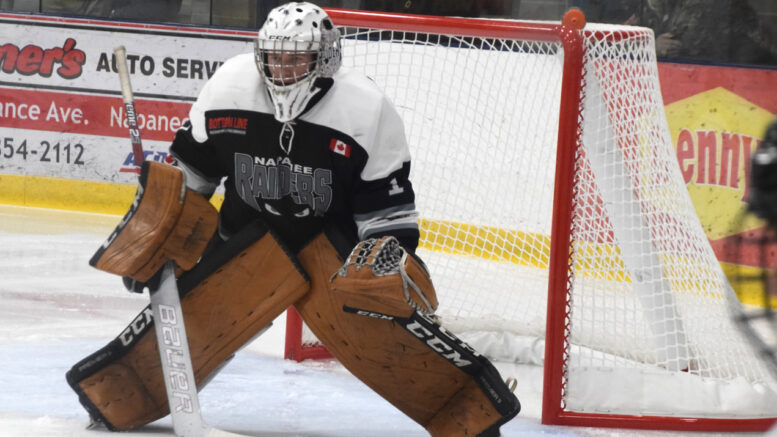 Bailey Maracle was a perfect 20-for-20 in save opportunities to lead the Napanee Raiders to a 4-0 win over the Frankford Huskies on Friday night at the SPC.

Blake Aylesworth scored the only goal the Raiders would need on the night just 2:35 into the opening period. Ben White would add another at the midway mark of the frame before Nicholas Goosney pushed the lead to 3-0 with a goal at the 13-minute mark.

White would tack on another 4:37 into the third period to close out the scoring. Becket Palmer-Stephen had a hand 75 per cent of the goals scored, earning assists on the final three goals of the game. White also assisted Gooney’s goal to give him three points on the night.

That was more than enough offense for Maracle who was there to answer whatever shots the Huskies could manage on the night. His defense also played a role, never allowing the Huskies more than nine shots in a given period. Meanwhile Napanee’s skaters blasted 41 pucks at Huskies goalie Hayden Candler.

The victory snapped Napanee’s mini two-game losing streak, which accounted for their only two blemishes on the season thus far. They improved to 17-2 on the year with a seven-point lead over the Amherstview Jets, who are 13-7-1 on the year. The Raiders also hold two games in hand over the Jets.

Napanee will look to keep up their winning ways on Thursday when they travel to Picton to face the Pirates at 7:30 p.m. Napanee will also be seeking to exact some revenge as the Pirates halted their 16-game win streak in their previous meeting. On Friday the Raiders are home to the Campbellford Rebels for a 7:30 p.m. meeting at the SPC. Campbellford will come into that game having finally won a game after losing 13 straight to open the season.