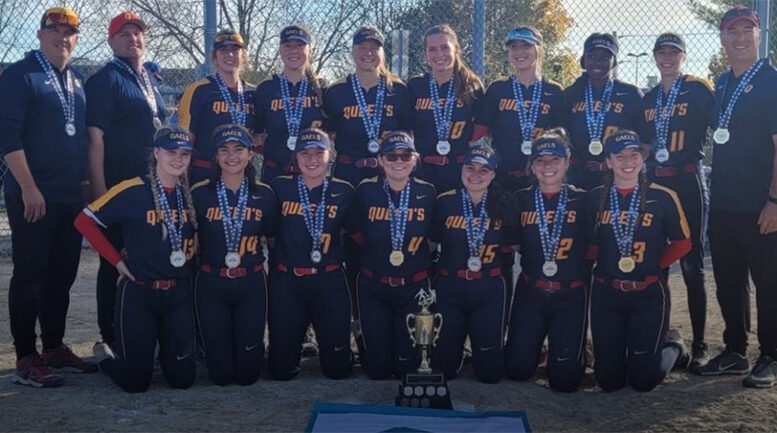 Kingston’s Queen’s University captured the gold medal in thrilling walk-off fashion, knocking off the 11-straight defending champion Western Mustangs by a score of 3-2, making winners out of head coach Shawn Trudeau and assistant coaches Scott Thompson, Damien Gilbert and Alexis Trudeau-all of which have either coached or played on a Napanee Express team.

“It really was an unbelievable weekend, capped off by that finish,” said Thompson. “Western has been the champion since 2010. They were on an 11-year straight run of winning the championship. So anytime you’re facing them you know that you’re facing one of the top teams and the girls really came in with their A game and did what we needed to do to win. Abby Jacklin was unbelievable on the pitching mound, she only allowed two runs and both of them were unearned.”

Ausha Guzzwell delivered in the clutch for Queen’s, connecting on the game winning hit to drive in Tayrn Millar, who got the rally started with a nifty slide into first to avoid a tag.

The gold medal was a historic moment for Queen’s fast pitch, as previously the women’s team had never so much as medalled as the provincial level. Trudeau took over as head coach in 2017 and has seen the team steadily improve in the regular season though still struggling to compete come the provincial playoffs-at least up until last weekend.

“We wanted to work on the fact that the kids play and work for each other,” said Trudeau. “It’s important that the athletes feel like they’re trying to make a play for each other, get behind each other and support each other. I just feel like if the team is working together and playing together they can go along way. It’s not about each individual, it’s about what you can do for somebody else to help them succeed.”

Gaels pitcher Lauren Kennedy also has Napanee ties, having played for the Express for several years. Lauren Kennedy, seen here with the Napanee Express, was a member of the gold medal winning Queen’s Golden Gaels. Photo by Adam Prudhomme.

“Lauren has worked over the last few years to keep getting better and she’s been one of our top pitchers and a great teammate and she’s been rock solid on the mound for us every time she takes the mound she always gives us a chance to win,” said Trudeau. “She battles for us.”

Trudeau hopes the Gaels success will encourage other Express players to take a look at their program when they start making plans for university.

It wasn’t only Queen’s with Express connections at the OUA championship.

Ashley Wildman, who plays right field for the silver-winning Mustangs, suited up for the Express’ U23 team this past summer, as did six members of the bronze medal winning Brock Badgers. By virtue of reaching the gold medal game, the Gaels have qualified for next year’s nationals, which will take place in October 2023.