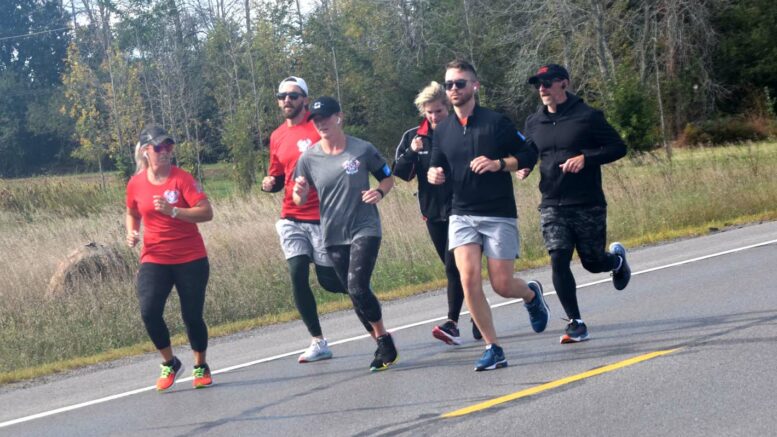 Officers taking part in the OPP's Memorial Run jog along County Road 1 West in Greater Napanee, part of a 480 km, three day journey to Ottawa to honour those who lost their lives in the line of duty. Photo by Adam Prudhomme.

Law enforcement officers from across the province are on day two of a three day, 460km run from the Ontario Police Memorial in Toronto to Ottawa to coincide with the National Peace Officer Memorial on Parliament Hill Sunday, Sept. 25.

Officers passed through Greater Napanee around 11 a.m. Friday morning via County Road 1 West, passed Napanee District Secondary School towards Bridge and then continuing on to Hwy 2 towards Kingston.

The run was created in 2005 when a small group of Peel Police Officers wanted to raise awareness of the annual memorial service and the officers who made the ultimate sacrifice in the line of duty. The run has now grown to over 200 runners including federal, provincial and municipal police services, Probation, Corrections and Canadian Forces as well as some American Officer. They cover the 460-kilometre route each year, raising awareness and funds for the victims’ families, while reflecting on those who are no longer with us.

The runners will travel along Highway 2 with escort vehicles providing support along the way. The group left Coburg Friday morning at 7 a.m., following Highway 2 towards Brighton. Two separate relays took runners through both Trenton and Belleville at approximately 9 a.m. and are set to arrive in the Kingston area around 12 p.m. Runners will continue east through Gananoque before hitting the Thousand Island Parkway for approximately 35 kilometers. Runners return to Highway 2 near Brockmere Cliffs and converge to Lyn Road/County Rd 46; at that point the team run will continue into Brockville, finishing at the Brockville Court House at approximately 5:30 p.m.

Members of the communities are encouraged to come out and support the runners as they complete day two of the three-day journey to Ottawa.

On Saturday morning, runners will commence at 8:00 a.m. from the Brockville Court House, east on Highway 2 towards their final destination, Parliament Hill at 3:00 p.m.