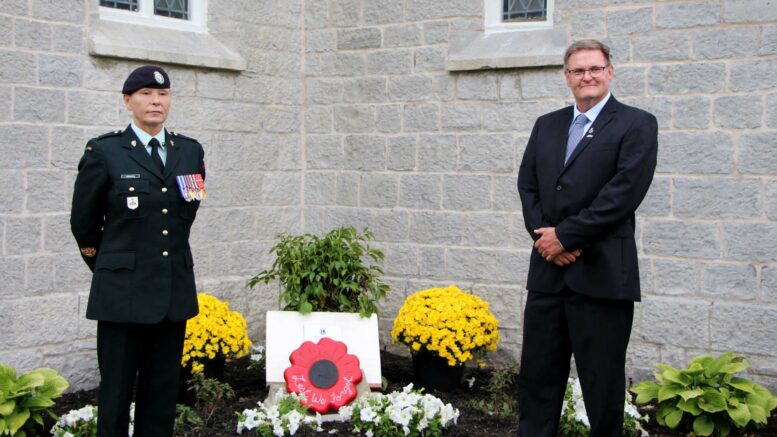 Master Warrant Officer Groves and Loyalist mayor Hegadorn unveil a replica poppy, which was gifted to the Odessa Lions as thanks for their support over the last 35 Remembrance Day ceremonies. Submitted photo.

On Tuesday, Sept 20, the Odessa & District Lions Club held a dedication ceremony at the Wilton Community Hall and Wilton Cenotaph to recognize individuals who have been long standing supporters and contributors to the Wilton Remembrance Day Service.

A highlight of the ceremony was the dedication of a beautiful ornamental cement poppy. The poppy, which was handcrafted by Master Warrant Officer (MWO) Renay Groves, was presented in appreciation to the Odessa & District Lions Club for their continued support of the annual Remembrance Day service in Wilton over the past 35 years.

The poppy was placed in the flowerbed at the front of the Wilton Community Hall, so that it could be appreciated and enjoyed by all residents and visitors to the community.  During the dedication ceremony, MWO Groves was joined by Loyalist Township mayor, Jim Hegadorn, to unveil the poppy along with a plaque which expresses the significance of the poppy.

“On behalf of Loyalist Township, I would like to thank Master Warrant Officer Renay Groves for making this beautiful replica Poppy and for recognizing the dedication of the Odessa & District Lions Club. Their hard work and commitment to the Remembrance Day Ceremony is graciously appreciated by Loyalist Township,” Hegadorn stated. “I would also like to recognize the service and sacrifice of the members of our nation’s armed forces who continue to preserve peace and freedom, not just here in Canada but around the world. In Loyalist Township, we’re blessed to call many of these individuals our neighbours and friends.”

The replica poppy, which is on loan from the Odessa & District Lions Club, will be displayed in the garden at the Wilton Community Hall annually, from early spring until after Remembrance Day.