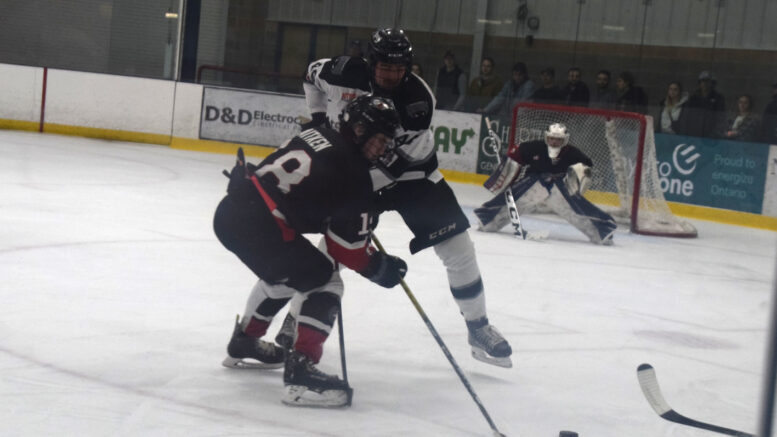 Cameron Krupa notched a pair of goals to help the Napanee Raiders open their 2022-23 Junior C hockey season on a high note, defeating the Amherstview Jets 6-1 at the Strathcona Paper Centre on Friday.

It would be all Napanee the rest of the way, particularly in the second period as Blake Aylesworth, Krupa and Noah Jacobsen each scored for the home team. Krupa’s second goal of the night came on the power-play, the lone goal scored on the man-advantage by either side. Christos Chronis tacked on a goal with just over two minutes left in the game to round out the scoring. Ben Carter picked up an assist on the goal, his second on the night, joining Krupa and Aylesworth, who had a goal and an assist, as a trio Raiders who opened their season with a pair of points on the night.

Bailey Maracle earned the win for Napanee, turning away 29 shots. Owen Willis took the loss, allowing all six goals on 34 shots. Napanee had nine power-play opportunities while the Jets had six.

The Jets were able to rebound quickly in their second game of the season, defeating the Campbellford Rebels at the WJ Henderson Arena. Eric Russell scored twice while Zackery McMahon, Jack Wiley and Caden Kekewich scored once.

Napanee will look to stay hot in their second game of the season when they welcome the Frankford Huskies to the SPC on Friday night. Game time is 7:30 p.m. On Sunday they hit the road for the first time to take on the Jets in Amherstview. Puck drop at the WJ Henderson Arena is at 7:30 p.m.