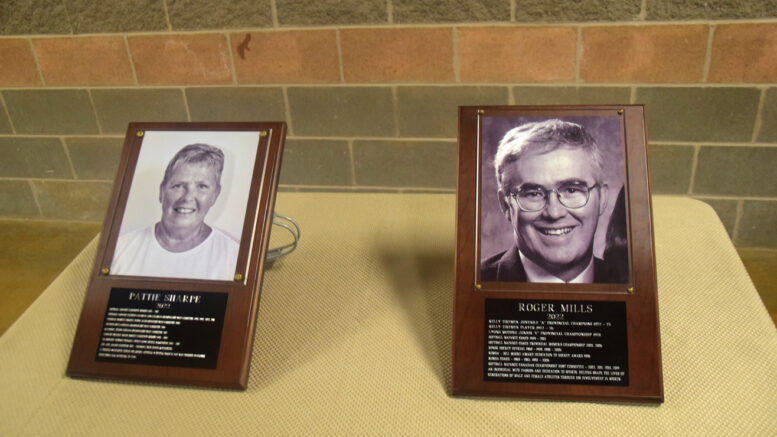 The plaques for Pattie Sharpe and Roger Mills were unveiled on Sept. 15 and were added to the Greater Napanee Sports Hall of Fame, located on the wall just outside the Goodyear Rink of the Strathcona Paper Centre. Photo by Adam Prudhomme.

Both used their time at the podium to thank all those who got them there, particularly their families. It was only fitting that their kids formally introduced them.

Mills, who took up playing sports at a young age ‘as just something to do’, was a member of the Kelly Tireman Juvenile hockey team from 1972-’76, helping them to an ‘A’ championship in his first season. He won a second championship with the Lyons Motors Junior C team in ’78.

During his playing days he also go involved in coaching, appearing in the dugout for a number of Softball Napanee teams from 1979-2015, winning a PWSA Championship in ’05 and ’06. He was a minor hockey official from ’68-’78 and again from 1998 to ’06 while also coaching with Napanee District Minor Hockey Association from ’69-’83 and again from ’92-06.

As a referee he says he began doing it for free but eventually worked himself up to where he was making a quarter per game-enough to buy a bag of chips and a chocolate bar at the time.

“It’s hard to find a male athlete in town that dad hasn’t coached from his brother Greg’s age down,” said his daughter, Erin, who joined her brothers Scott and Brent to introduce him at the ceremony. “Softball was where he was most successful, as most of us were. He has coached multiple provincial championship winners across the girls and boys divisions and won gold medals from the Canadian championships as well. A number of female players that came through the system are now playing at the university level as well. As a coach he was not afraid to stand up for his team to an umpire or referee when he whole-heartedly disagreed. He was always fair to his players and enjoyed every minute on the field were he performed.” 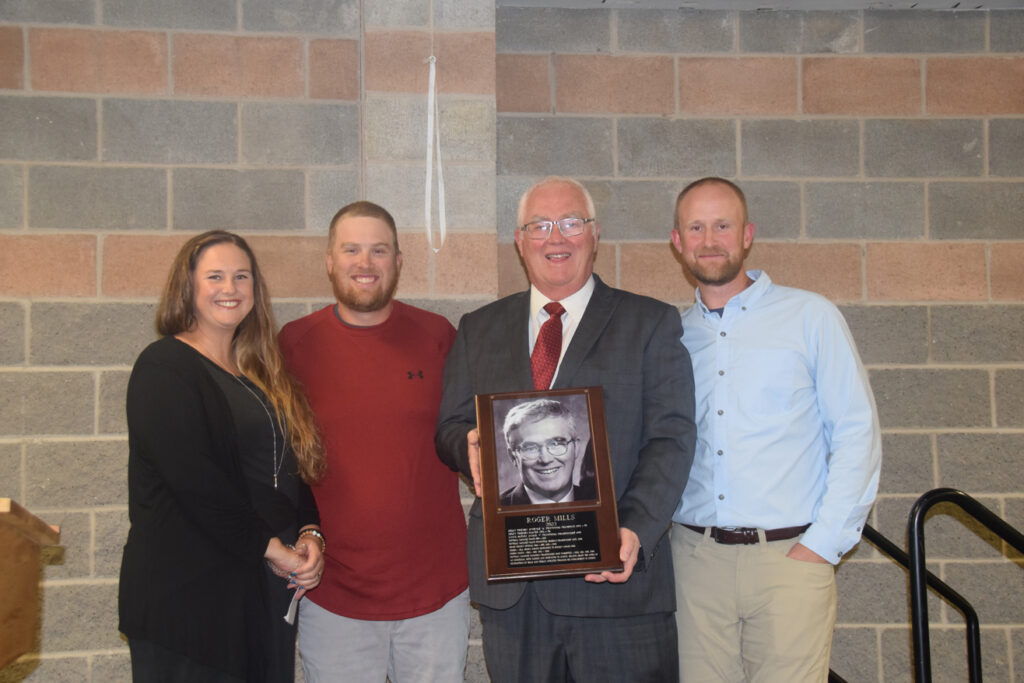 Roger Mills holds his plaque surrounded by his kids Erin, Scott and Brent during his induction to the Greater Napanee Sports Hall of Fame. Photo by Adam Prudhomme.

Mills continues to help Softball Napanee through various ways, be it working the barbecue or score keeping.

“Sports have led to so many great things, especially in the spring of 1975,” said Roger. “I was asked to volunteer coaching girls baseball. Here we are 47 years still trying to volunteer and I’ve got me a lucky star around I’ve got (his wife) Karen, she asks me to coach a baseball team and I don’t know why, but I did, and everything else followed. It’s a real pleasure to watch Scott, Brent and Erin, they get into coaching and volunteering their time. That’s what we need around.”

He says sports were life for him at an early age and he just wanted to give back.

“We’re not looking for athletes,” said Roger of being a volunteer. “We just do it because it benefits someone else. That’s all I’ve tried to do.” 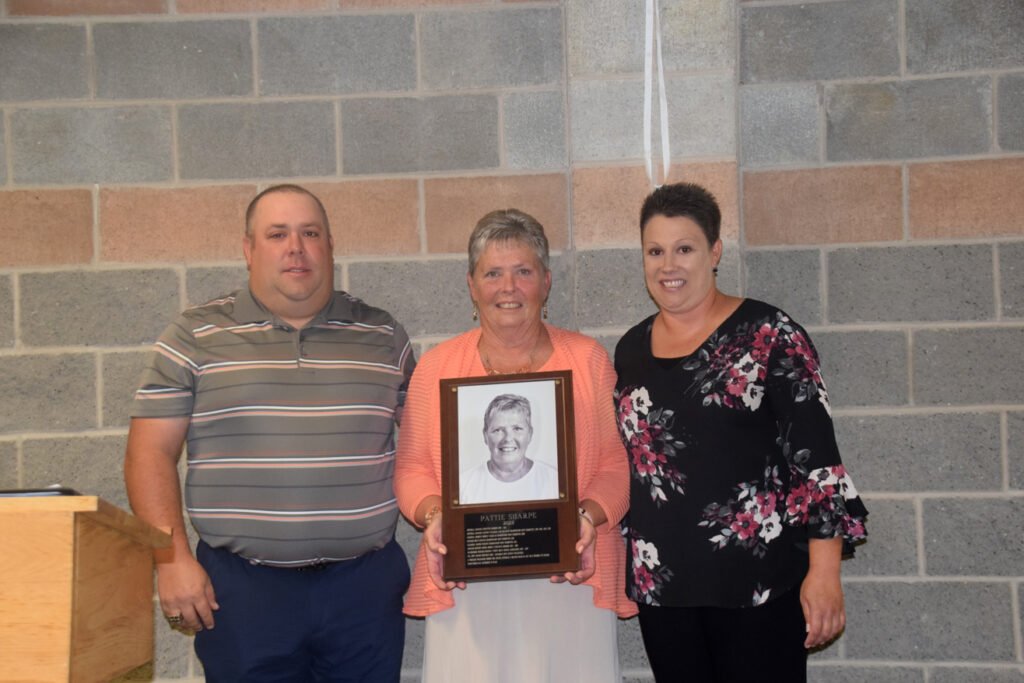 “She was usually the manager of the teams when dad coached and perfected her travel agent and tour guide skills,” her son Ryan, who was joined by his sister Lindsay Sharpe-Scott, said during her formal introduction. “It was always eventful if she had to be the one reading the map or giving directions. Usually dad ended up pulling over, finding out where we had to go and get us to the rink.”

Pattie recalled being approached by Robert Paul and Richard Dickson to be secretary of Softball Napanee. When she asked for any previous minutes for past meetings she quickly learned there were none-and a new organizational method was needed.

“This was beginning of my 30 plus years with Softball Napanee,” she said. “When Richard and Robert decided to take a step back from the day-today running of Softball Napanee, they asked Karen Mills, Andy McGarvey, Joe Lewis, Harvey and myself to take the reins. They were always available to share their experiences and advice and always involved in any major tournament Softball Napanee hosted, Canadian championships, Eastern Canadians, provincials, eliminations. The Women’s U18 Canadian Hockey Championship tournament was one of my favourite events. Taking on accreditation and registration was somewhat of a challenge. Many scouts from across Canada and the US attended this tournament to watch these young women play…It’s always great to say when the Canadian women’s hockey team plays that the captain Marie-Philip Poulin, who played for Team Quebec and Brianne Jenner, who played for Team Ontario Red, played at the Strathcona Paper Centre.”

Earning a selection into the hall of fame is no easy task as it requires nominees be at least 50 years old with 25 years minimum involvement with sports in the community as a coach, player or builder.

As both inductees were introduced they also had the chance to help unveil the plaques that were to be added to the wall of the SPC corridor. They become the 28th and 29th members inducted to the hall of fame and first class since 2017. There have now been seven induction ceremonies, the first of which took place in 1997 when inaugural members Bruce McPherson, Murray Dean, Jack ‘Tar’ Brady, Harold Webster, Walt Gerow, Jack Dale and Fred Bentley were enshrined.