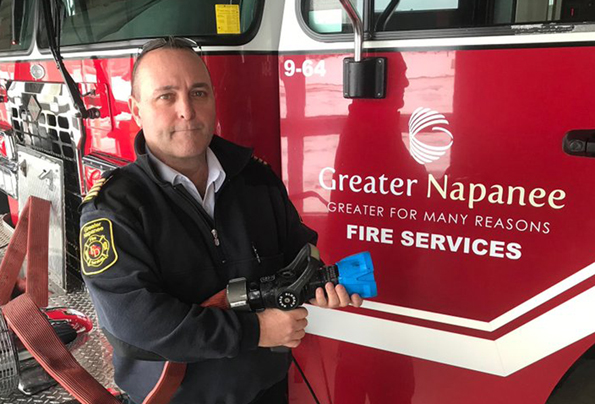 Hammond was officially given the role during Greater Napanee council’s Sept. 13 meeting. Fire prevention officer Kevin Duncan was also promoted to account for Hammond’s promotion, taking on the role of interim deputy chief.

Both moves were necessary after the previous chief John Koenig stepped down and retired.

“I wanted to formally thank John for his service to the Town of Greater Napanee,” said Greater Napanee CAO John Pinsent. “We will make sure we have an appropriate time to celebrate his service in the municipality and his success here and not forget he’s done yeoman’s work for the last couple of years. The second point with respect to John is this is not an easy thing for anybody that wears a uniform in a command position to relinquish the command while he’s still here and to let the new chief Bill Hammond take control. You can’t have two chiefs run an organization…John I want to thank him for being that guy who understands what we’re doing.”

Pinsent said the town was able to make a seamless transition due to having two qualified candidates already within the organization.

“This is a perfect example of what we want to do as an administration with our staff in recognizing that when you have talent within you can actually groom that talent with a succession plan and when somebody leaves not automatically go out to the market and hire,” said Pinsent. “We’ve had the perfect opportunity to be able to do that with our staff internally and as a demonstrable success we now have an interim fire chief and interim deputy chief that we’ve grown from within and there’s some more things that we’re going to do within the fire department.”

In passing the by-law to appoint the two firefighters to their new role, mayor Marg Isbester said both were well qualified.

“I think the right decisions have been made,” said Isbester. “I want to thank certainly chief Koenig for his efforts and thank everyone involved in Emergency Services. It’s been a tough go for the past, for the whole term, between problems and COVID it maybe hasn’t been the most fun time that all of us have had.”