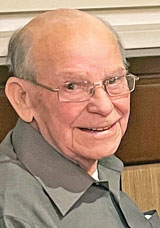 It is with sadness we announce the passing of Harry Martin Parks who passed peacefully away at the Pine Meadows Nursing Home in Northbrook on Tuesday, September 06, 2022 in his 93rd year. Loving husband of the (late Joyce Parks nee Hawley). Cherished father of Marilyn Parks (late Allan) of Brockville, Darlene Lowry (Tom) of Marmora, Rhonda Ballance (late Carl) of Yarker. Son of the late Oake and Olive Parks of Kaladar. He will be sadly missed by his grandchildren Kylee (Chris), Kurt (Skye), Lindsay (Drew), Carson and (late Tyler) and great grandchildren Emily & Eric, Tessa & Ayra and step grandchildren Willow & Lucas. Harry is survived by his sister Lilly Spicer and sister-in-law Maretta Parks. Harry had three brothers Herb, Lee & Fred and five sisters Edith Thompson, Agnes Meddings, Ethel Woods, Nellie Rolson & Patsy at a year & a half that are all deceased. He will be fondly remembered by his many nieces, nephews and friends. No public service will be held as per Harry’s wishes. The family held a “Celebration of Life” when our father turned 90 years of age. It was a wonderful time as Harry got to see & spend time with all of his family and friends. As expressions of sympathy donations to a charity of your choice will be greatly acknowledged by the family. A slideshow for Harry will be placed on the Hannah Funeral Home website at a later date.