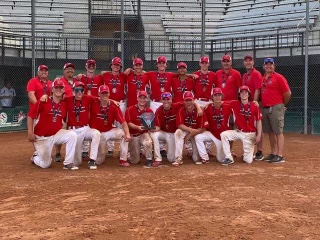 Down two runs with just two outs to work with in an elimination game, Napanee’s U17 Express boys appeared destined to finish as bronze medalists at the Canadian Fast Pitch Championships in Saskatoon, SK.

At least that’s what it may have appeared from the outside. The team itself had no intentions of going home early on that Sunday evening. Instead they got to work on the improbable, banging out nine straight hits to score 10 runs, effectively turning their 4-2 deficit into a 12-4 advantage. Napanee would close out the game in the bottom half of the inning and stun the Wilmot Thunder with a 12-5 victory.

Conner Hopper drove in four while Brandon Barker and Will Myers each plated two as the Express punched their ticket to the gold medal game.

Napanee was unable to carry that magic over into the finals, which began about 40 minutes after the final out of the semifinals, as they fell 7-0 to the Chatsworth Longhorns. Still the Express had no reason to hang their heads, finishing as silver medalists at the Canadian championships.

“That might actually be the most exciting half inning any of our athletes will ever have,” Express coach Stephen Paul said of their semifinals comeback. “They scored 10 runs in the top of seventh when down 4-2, which was simply amazing. That inning itself will have lasting memories for kids on our team, that’s for sure.”

Even with just two outs left and no one on base, the Express weren’t ready to throw in the towel.

“The coaching staff is so proud of what they did,” said Paul. “There were nine straight hits that took place after the first out. That’s incredible to do that in a pressure situation at a Canadian championship, that speaks so highly to the talent level and just the overall grit of our team and the never give up approach which is so valuable in fast ball and anything you do in life.”

“Chatsworth is an extremely good team that played very well this week,” said Paul. “They were definitely deserving champions based on the level of play they did consistently across the week. They’ve been a big competitor of ours all season and this year they just had our number so hats off to them.”

Though most teams were comprised of last year U17 players, the Express were unique in that they were evenly split between first years and second years. That bodes well for the club next year as they’ll have a nice core in place while welcoming the graduating players from this year’s gold medal winning U15 Express. Meanwhile the graduating U17 players will join a strong U20 Express team that is coming off a silver finish at this year’s Canadians-and they have the benefit of once again hosting the event next August.