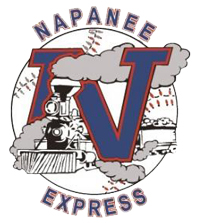 Down to their final two outs and trailing by two runs in the against the Wilmot Thunder in the semifinals at the Canadians in Saskatoon, the Napanee U17 Express weren’t ready for their season to end just yet.

Instead, they erupted for eight straight runs as part of a 10 run innings to turn their 4-2 deficit to the Wilmot Thunder into a 12-4 lead and eventual 12-5 victory.

Conner Hopper drove in four while Brandon Barker and Will Myers each plated two as the Express stunned the Thunder and punched their ticket to the gold medal game.

Napanee jumped out to an early 1-0 lead in their first at bat only the see Wilmot rally with three in the second. The Thunder added one in the fifth and were just six outs away from sending Napanee home as bronze medalists. Instead the Express chipped away with one in the sixth and then roared to life with eight straight runs without making an out.

After the second out of the inning was made the Express got right back to work with two more to push the lead to 12-4.

Napanee will now get set to take on the Chatsworth Longhorns shortly for the gold medal. Updates will be provided at https://gc.com/tmt/summer-2022/2022-u17-boys-canadian-fast-pitch-championship-629fbef015958878bbf67256.

The game will be live streamed at https://www.youtube.com/watch?fbclid=IwAR3PZi-Dmsni5ThEoM4QLrhbG1rtJHTGmSS_kfh8cqUiM_rS2jT-kEce8FM&v=TcYwzVVlks4&feature=youtu.be