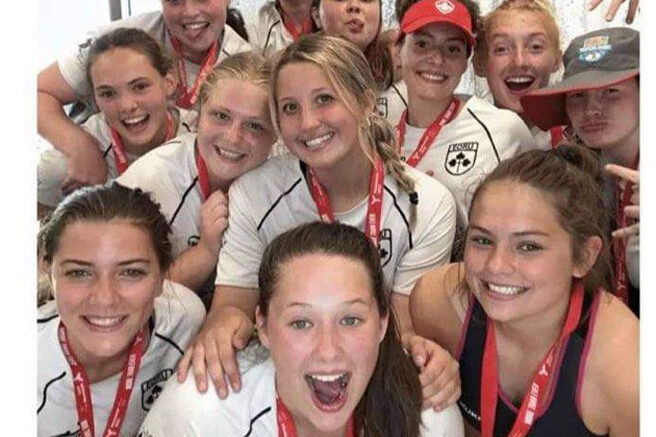 A pair of Napanee’s up-and-coming rugby athletes attained a bronze medal at the Ontario Summer Games, which were hosted this weekend in Mississauga.

Held every two years, the Ontario Summer Games is the largest multi-sport amateur event in the country, featuring athletes aged nine to 18. Rugby sevens was among the full slate of games played throughout the weekend.

Anna-Claire Young and Claire McConnell both suited up for the Eastern Ontario Rugby Union-Young at the U15 level, McConnell at U17, competing against other regions from across the province in a round robin tournament.

Both Napanee ladies are new to the sport having never played before joining their respective high school teams this spring. Young wrapped up her Grade 9 season with the Holy Cross Crusaders while McConnell was a member of the NDSS Golden Hawks.

EORU’s U15s dropped a 20-0 decision to open their tournament against Niagara before playing to a 22-22 draw against Southwest. They closed out the round robin with a 19-12 win over Toronto.

In the bronze medal game they defeated Southwest 21-0.

“I hope to keep developing skills that could help me with other sports and just keep learning,” Young said heading into the tournament on what she hoped to gain from the experience.

A multi-sport athlete, her soccer experience has helped her adapt quickly to rugby.

“I’m hoping to get a scholarship with either rugby or soccer, but I think I might have a better shot with rugby,” she says of her post-secondary ambitions.

Prior to joining the Crusaders for their KASSAA season this spring, she had never played a rugby match.

“My mom told me that I should try it because I’ve always been a little bit aggressive with my sports so it kind of fit pretty well,” Young said. “And I thought it would be fun.”

It was during a game with the Crusaders that she caught the eye of a coach who recommended she try out for the EORU’s Summer Games squad. She took that advice and once again stood out, earning her a selection to the team made up of players from the Kingston area to Ottawa.

The rugby played at the Summer Games was a seven-aside format, which debuted at the summer Olympics in 2016. Sevens marks a major contrast to the 15s that Young plays in high school in that it is a faster game both in terms of game length and action on the field.

EORU’s U17 team rebounded from an opening game loss to come back with a 34-0 win over Southwest. They dropped a 29-0 match to the Reds to close out the round robin.

In the bronze medal game they shutout Southwest 31-0 to capture their medal.

After COVID-19 cancelled sports in her Grade 9 year, this year marked the first time she was able to step onto the rugby pitch as a member of the Golden Hawks. She noted the style of play at the Summer Games-14 minute games with just seven players aside versus the 75-minute matches with 15 players on the field-was an adjustment, but one she took too quickly.

“I really enjoy sevens because I really like to run, running is probably one of my strong suits but I also like 15s because there’s a lot of strategy to it, a lot of building up, a lot of flow to it,” said McConnell. “In sevens it’s just like one break through, you score a try. In 15s it’s plays and loops.”

Playing sevens also gave her the chance to follow in the footsteps of one of her idols, Napanee-born Olympic bronze medalist Britt Benn, who represented Canada in 2016 and 2021, winning the bronze at the Rio games.

“I’ve always heard about her and watched her and thought she’s a pretty inspiring woman,” McConnell said of Benn.

As memorable as her on field experience was, McConnell said the entire Summer Games was a highlight.

“That was probably one the best thing I’ve ever experienced in my sports career,” she said. “The opening ceremony, it was just a really good experience that I wish everyone that I’ve ever played with could experience.”

Both athletes will return to the Kingston Panthers rugby program for the remainder of the summer before returning to the pitch next spring for their respective high school clubs.

– Napanee’s U17 Express boys also took part in the Summer Games, going 3-3 in their softball tournament.

Napanee opened the tournament with an 11-4 win over Fitzroy Harbour before defeating the Hillsdale Haymakers 13-2.

On Saturday Napanee fell to Wilmot 14-9 and then came up just short in a 5-4 loss to the Chatsworth Longhorns.

Napanee kept their medal hopes alive with an 8-2 win over the Springbrook Royals before losing 15-5 to the Drumbo Lightning to end their tournament.

All three of the teams to defeat the Express went on to medal with Drumbo taking gold, Wilmot silver and Chatsworth bronze.

Next up for Napanee is the U17 Canadians, which will run Aug. 10-14 in Saskatoon.