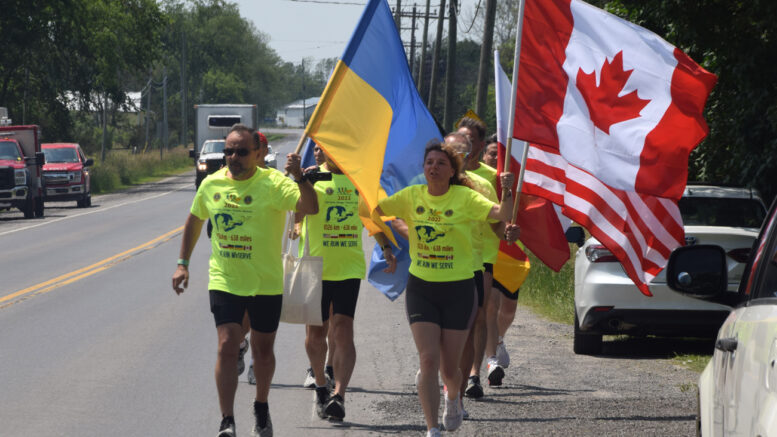 Runners from Poland, Ukraine and Germany arrive in Odessa as part of the Lions Charity Run, which began in Chicago and ends in Montreal, raising funds for Ukrainian children along the way. Photo by Adam Prudhomme.

A contingent of international Lions Club runners made a stop in Odessa on Wednesday where they were met by members of Loyalist Township’s three Lions Club branches.

Travelling along Hwy 2 en route to Montreal, the runners were greeted just outside the Odessa township limits for a special presentation of $1,500 to support their cause of helping the children of Ukraine displaced by the ongoing war.

“The runners are from Poland, Germany and Ukraine,” explained David Shane of the Odessa Lions. “The whole objective here is to raise money for the children of Ukraine. We’ve got three Lions Clubs-Bath, Amherstview and Odessa, each donating $500.”

The six runners taking part in the Lions Charity Run departed Chicago, IL, on June 18 and are due to arrive in Montreal, Que. on Friday. All told they will have travelled 1,026 KM for their journey. Bath, Odessa and Amherstview Lions Club members welcomed the runners to Loyalist Township, presenting them with a $1,500 cheque for their cause. Photo by Adam Prudhomme.

“The goal of these runners is to raise $100,000 for the children of Ukraine,” Shane told the crowd gathered at the Odessa town limit sign on Wednesday. “Our village has a historical connection to Odessa, Ukraine as it was re-named Odessa in 1856. We are inspired by the energy and commitment by these Lions runners. We wish them well as they journey to Montreal.”

Originally known as Millcreek, the village was renamed to commemorate the 1854 British siege of the Black Sea port of Odessa during the Crimean War. That connection made the support all the more fitting.

Mariusz Szeib of Poland is one of the six runners taking part in the run.

“Three and a half million refugees in two months appeared in Poland,” he said. “It is not help from our government, it is help from our population, our citizens, everyone wanted to give them food or a place in their home….You are far away but you know how important it is.”

Hastings-Lennox and Addington MPP Ric Bresee, who also happens to be a Lion, was on hand to help welcome the group to Loyalist.

“The Lions Club has been the ‘we serve’ organization for literally over 100 years now and it is wonderful that you’ve taken the time to show this support for the people, specifically the children, of Ukraine in their time of need,” said Bresee. “We thank you for your efforts and anything we can do to support you along the way, we want to do.”

Along with donating to the charity run, the local Lions Clubs, including neighbouring Napanee, donated some extra to help cover the accommodations of the runners who spent the night in Kingston before continuing on the next leg of their journey.

The conclusion of their run will be the Lions Club International convention in Montreal.

The Lions Charity Run is an annual event and each year they support a different cause such as remodelling orphanages in Germany, assisting Syrian refugees and building schools in Nepal. The run has been held each year since 2013.