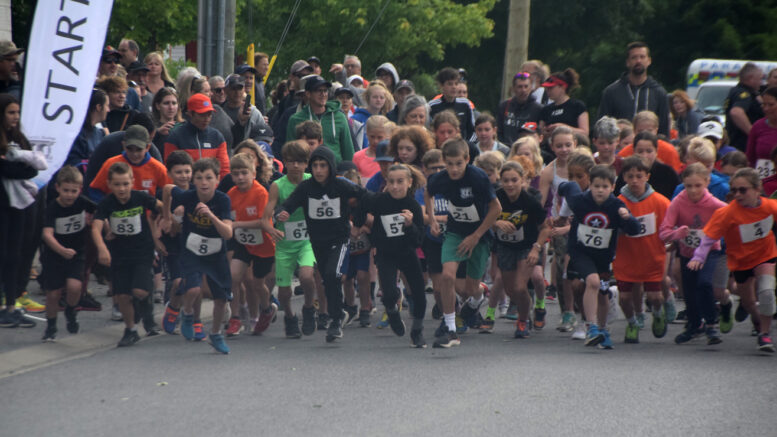 Runners push off at the starting line of Saturday's Napanee Heritage Race for the Kids' One-Miler, which began at the L&A County Courthouse. Photo by Adam Prudhomme.

History was re-written during Saturday’s Napanee Heritage 5K and Kids One-Miler race as new records were established for both the male and female divisions.

Kevin Coffey’s time of 14:52 set the new standard for the men’s 5K while Elaina Raponi’s time of 18:15 is the new best for women. Both runners hail from Kingston. Napanee’s Carter Free had held the overall course record of 15:27, which he set in 2018. The 5K race saw 300 participants, the most ever at the Napanee Heritage Race. Photo by Adam Prudhomme.

Not just for competitive runners, the race also contained a walking division and saw participants from age four to late 70s.

A full list of results, broken down by age categories, can be found at https://www.napaneeheritagerace.com/results-and-photos. New course records weren’t the only milestones reached on the day. This year marked the first time the race was entirely sold out with 300 participants in the 5K race and 100 kids in the one-miler. Proceeds from the race are still being calculated and will be put towards the installation of outdoor fitness stations to be placed on the planned extension of the Napanee River trail, which is being done in partnership with the Gibbard District. This marks the second year of a three-year commitment from race organizers to donate the proceeds from the event to this project. Napanee’s Macpherson House is in the background as runners round the corner during the Napanee Heritage Race. Photo by Adam Prudhomme.

Named for its course that contains several of Napanee’s historic landmarks, the Heritage Race departs from the L&A County Courthouse and leads participants under the train bridge, passed the Macpherson House, along the Napanee train station and back to its original starting point. The Heritage Race was first run in 2016 with a two-year interruption following the 2019 race due to the pandemic.

Prior to the race organizers recognized L&A County’s economic development officer Rob Plumley with a builder award for his efforts in helping the event over the years.