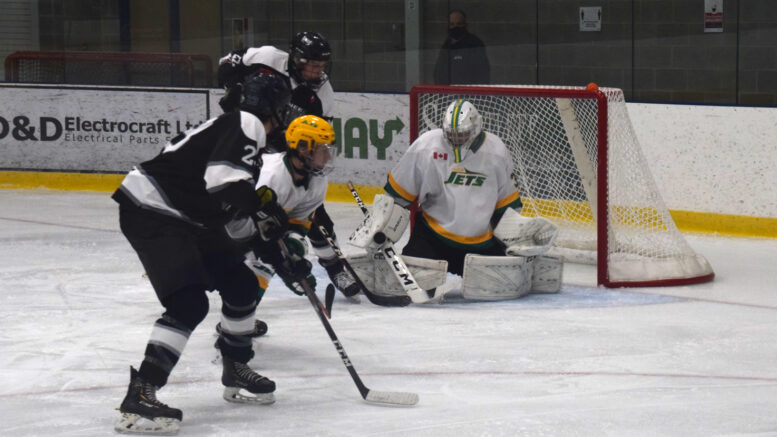 Goalie Jeremy Piazzi, who just finished his over-age year with the Amhestview Jets, was among six players added by the Deseronto Bulldogs of the senior EOSHL in their pre-season draft. Photo by Adam Prudhomme.

With the first picked the senior hockey team added Mathieu Halle, who recently wrapped up his junior career as captain of the Amherstview Jets. He also suited up for the Markham Royals and Brockville Braves, both at the Jr. A level. He had 31 goals and 45 assists for the Jets last season, adding four goals and six assists in 11 playoff games.

In the second round they drafted Tyendinaga’s Noah Brant, who just completed his fifth year with the Picton Pirates. An offensive-minded defenceman, he had 26 goals and 16 assists in his final junior season with the Pirates.

The Bulldogs added another former Pirate with their next selection, taking Nate Boomhower. He had 15 goals and 25 helpers last year with the Pirates while also skating in six games with the Wheeling Nailers of the professional ECHL.

Next the Bulldogs went out of province, calling on Braden Mercier, who hails from Yarmouth, NS. He’s split time with the Queen’s Golden Gaels and the Jr. A Yarmouth Mariners.

With their fifth pick the Bulldogs again went with a graduating Pirate, taking Owen Dever. He had 23 goals and 12 assists last season.

With their final pick the Bulldogs added to its goaltending core, slecting Jeremy Piazzi. The former Napanee Raider also suited up for the Gananoque Islanders before finishing his career with the Jets last season. He went 16-2-1 with a GAA of 2.22 in 2021-22.

Following the draft the EOSHL owners met to discuss the upcoming season. All 12 teams are confirmed to return and the same six-team divisions will remain in place. The league is looking at a 20 game regular season in which all teams will qualify for the playoffs-the top two teams will advance to the quarters with a wild card match up between the third seed and sixth seed while fourth and fifth will square off. The wild card round will be a unique format in that the top seed will need just one win to advance while the lower seed will need two.

The league has tentatively selected the weekend of Sept. 17 as their opening weekend, which would represent an earlier start as opposed to the two previous seasons.