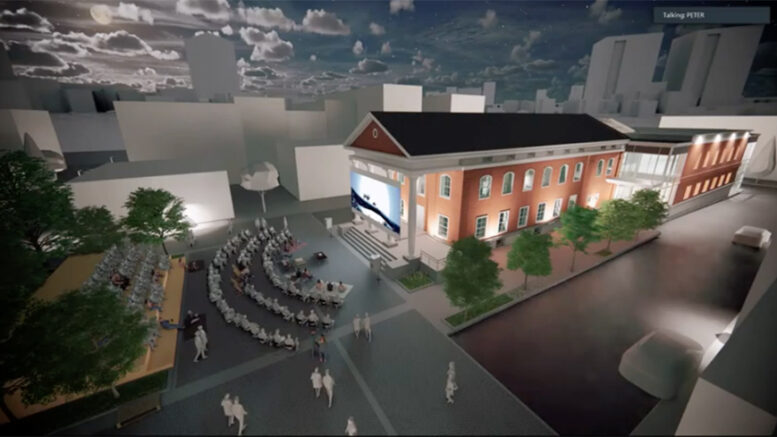 A concept drawing of proposed renovations to the existing Greater Napanee town hall with library building shown at the back.

Conceptual drawings of what Greater Napanee’s town hall could soon look like were shown to council during May 24’s meeting.

Prepared by Peter Berton of Ventin Group Architects, the drawings presented options for how the firm could construct a two story library onto the back of the current town hall, facing Centre Street, while also creating an outdoor market and amphitheater within Market Square. The designs are part of the town’s early stages of exploring the idea of moving administrative services out of Market Square into one building-possibly 99 Advance Ave-while also relocating the Napanee branch of the Lennox and Addington County Library into the town hall. Council chambers would remain at town hall. 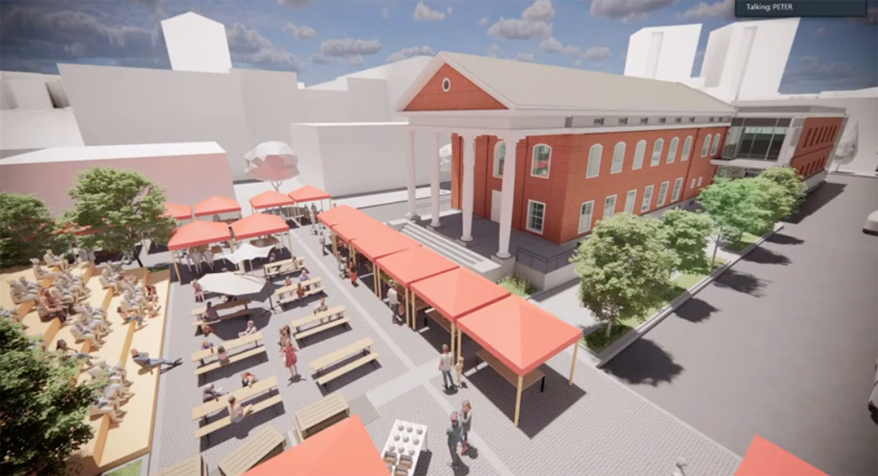 The new design would allow for markets to be held in Market Square.

“One idea we have is to create a Town Square that’s not all kind of landscaped so heavily that you can’t really use it for open space,” said Berton. “We see the potential of having markets out here.”

Part of the proposal includes bleacher style seating that face the current main entrance of town hall that could be used for outdoor events such as summer movies, similar to what the City of Kingston hosts. One option would be to resurface the streets of Market Square with stone to accommodate markets. Doing so would revert the square back to its original purpose, as the town hall was the site of a farmer’s market dating back to the late 1800s.

The plan also includes restoring town hall back to its original red brick façade and building a library building that would match. The library would be attached to town hall, with access from within the current town hall building. 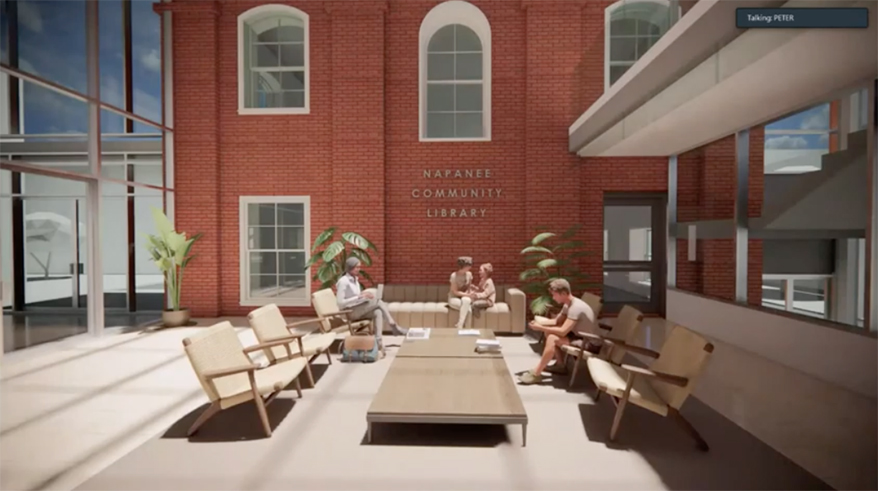 A drawing showing the inside of town hall with access to the proposed new library building.

“I think we’ve proven that the library can be accommodated and use part of the town hall as the library,” said Berton.

Funding for the project, should it be approved, would be shared between the town and L&A County. No estimate has been calculated yet, as the project is still very much in the planning development. Estimates are expected to be presented to council at a later meeting.

Council voted to accept the report.

-Council voted to declare June to be Deafblind Awareness Month within the town. Similar to last year, a yarn bomb display will be affixed to the fence at Springside Park for the month of June. The request was made by Shari Maracle on behalf of the Canadian National Institute for the Blind (CNIB).

-Before the meeting mayor Marg Isbester took time to recognize the passing of Bonnie Sweet.

“She was probably the premier hockey fan of the Napanee Raiders, one of the biggest fundraisers for all organizations through Bingos and all kinds of other things,” said Isbester. “Just as somebody said to me a few moments ago, just a plain nice person that was involved in so many things.”

Isbester express sympathy to the family.

“She was one of those people that just made the world a little bit better to live in,” added Isbester.