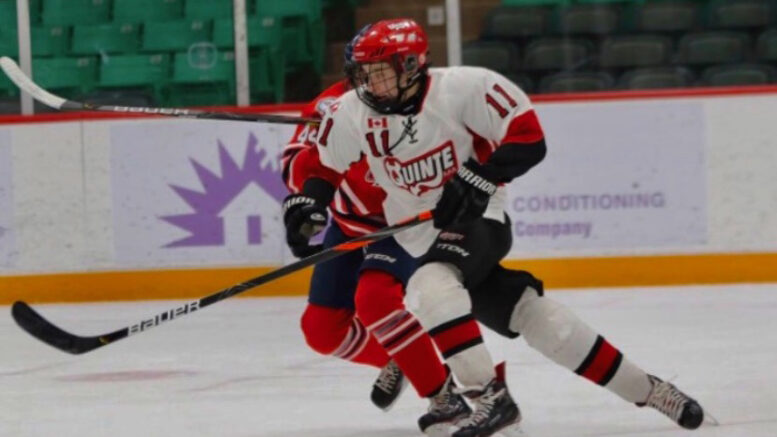 As impressive as Cal Uens’ performance on the Owen Sound Attack blueline was this season, his work inside the halls of Owen Sound District Secondary School was the real showstopper.

Uens was able to post the remarkable grades while adjusting to life in as a billeted player in a new town while making his OHL debut.

“I think the big thing was separating my school from hockey and making sure that I get all my school work done before I go into the rink,” Uens said of how he was able to succeed in his studies. “Just trying to make sure that I have a clear mind going into that dressing room.”

On the ice he had four goals and 14 assists over 68 games.

“The Attack organization would like to congratulate Cal Uens on being named the recipient of this year‘s Ivan Tennant Memorial Award,” said Attack general manager Dale DeGray in a release on the team’s website. “Cal has been an incredibly dedicated individual both on and off the ice. Contributing in all 68 games this season and at the same time will finish with enough credits to graduate Grade 12 a year early. This in itself without the added commitment of playing in the OHL would be a tremendous feat. It is great to see that Cal’s drive in the classroom has been rewarded.”

Finishing high school a year early allows him to focus strictly on hockey ahead of his NHL Draft eligible year in 2023.

While his dream is to suit up for an NHL team, he knows the importance of education.

“My parents have always supported my dream of hockey but they also know that it’s important for me to have Plan B because at the end of the day there’s a very few amount of people that get to live out their dream of playing hockey for a living,” said Uens. “Just having that Plan B to fall back on if things don’t go the way I’d like is very important.”