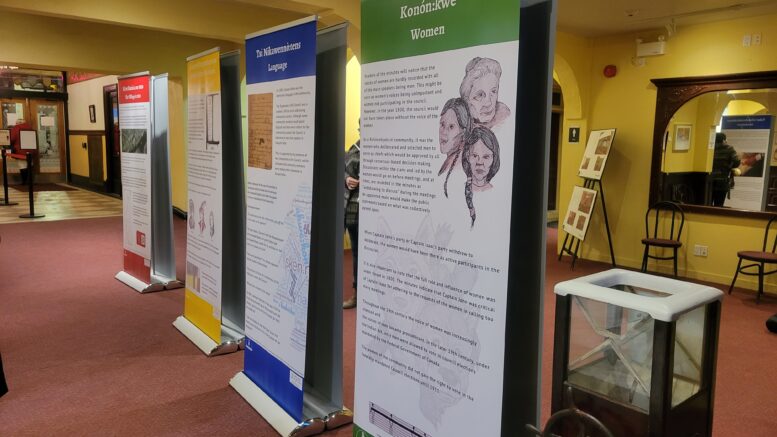 Panels from Tsi Tyónnheht Onkwawén:na (TTO) upcoming exhibit Six Strings, which will be featured at the L&A County Museum June 3-24.

A bitter dispute. Violence and murder. Leaders tasked with getting to the bottom of it and helping a community move forward.

No, it’s not the latest Netflix drama – it’s the true story of a fateful event that occurred within the Mohawk Village on the Bay of Quinte on June 10, 1800. And it’s coming to museums, cultural centres, and schools in the coming months.

Tsi Tyónnheht Onkwawén:na (TTO) is pleased to debut the Six Strings travelling exhibit at the Museum of Lennox & Addington from June 3 to 24, 2022.

Six Strings is the compelling, revealing, and true account of how the Mohawk people conducted their own system of justice, embracing reconciliation and forgiveness with the custom of condolence and commitment to move forward toward peace

The museum exhibit, consisting of a series of banners, is based on the themes of an actual transcript of a nine-day council meeting held in Kenhtè:ke in September 1800. The full transcript features the testimonies of witnesses to the murders offering a unique glimpse into the lives of the Mohawk people and their complex interactions with the changing world around them, at a moment in time before Indigenous people were obliged to abide by the British colonial court system.

In addition to hosting the travelling exhibit, on June 7 at 7 p.m the Museum of Lennox & Addington will host a screening of a seven-minute teaser film on the Six Strings story in the Mohawk language.

The short film debuted at the Regent Theatre in Picton, Ontario in February and has been accepted into the 2022 Wairoa Māori Film Festival. A full production of Six Strings into a 50-minute documentary film is contingent on future funding and will draw on the talents of Indigenous artists, historians, musicians, and actors to create a vivid and remarkable view of Mohawk life.

“The Six Strings exhibit will help educate both Indigenous Peoples and settlers on many elements of our cultural heritage,” said Callie Hill, Executive Director of TTO. “We envision a community where our stories are part of all aspects of our daily life, and one way we achieve this is through the preservation, sharing and animation of cultural heritage.”

After June, the Six Strings exhibit will be available in four-week rotations to be featured at other museums throughout Ontario and New York State. Museums, cultural centres, schools and historical sites interested in hosting the exhibit should contact TTO.