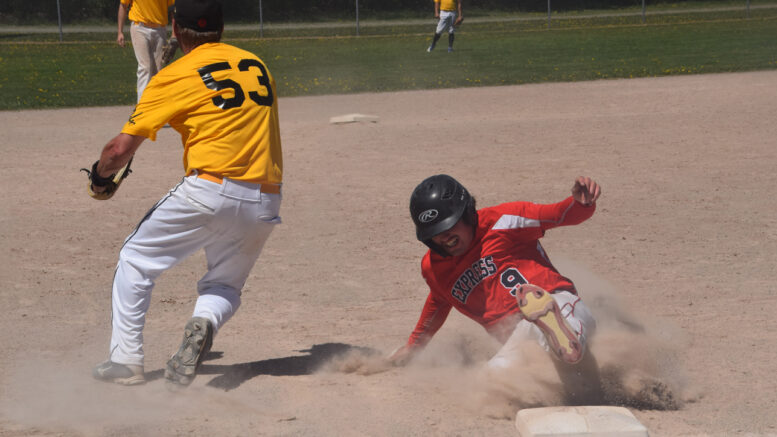 Lachlan Stover of the U20 AFW Construction Express slides into third during Saturday's Early Bird Tournament held at the Napanee Fairgrounds. Photo by Adam Prudhomme.

The host Napanee AFW Construction U20 Express may not have taken the top spot at their tournament held this weekend at the Napanee Fairgrounds, but they did pick up some valuable experience.

That was the main objective of the Early Bird Tournament, which saw the Express place third behind the first place Owen Sound Selects and the second place Kingston Axemen.

“Having a tournament that early in May you worry about weather but Mother Nature cooperated for us which was huge, everyone’s full of sunburns now,” said express coach Cory Brooks. “Starting out a tournament and playing four or five games that early in the season is very stressful on the body after having two years of COVID off. Thank God we’ve got younger guys because I know the older guys really felt it Sunday.”

Facing off against a mix of men’s teams and fellow U20 teams, the Express went 3-0-1 round robin play to advance to Sunday’s semifinals.

Connor Brooks tossed seven no-hit innings to open the tournament for Napanee and the bats backed him with seven runs in a shutout of Osgoode on Friday night. After falling behind early to the Dundalk Pirates, the Express rallied to come back and earn a 4-4 tie. Ty Branchaud connected on a solo home run to help ignite the comeback. Napanee picked up a 9-2 win over Owen Sound and then defeated Quebec to finish unbeaten in their five team division. 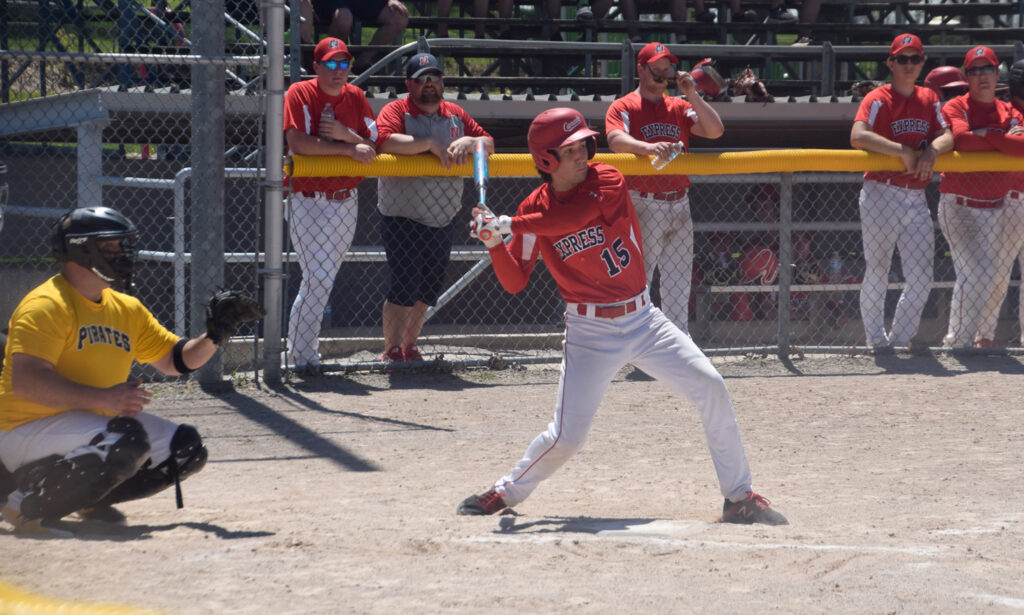 Ty Branchaud starts his swing as he connects on a solo homer. Photo by Adam Prudhomme. 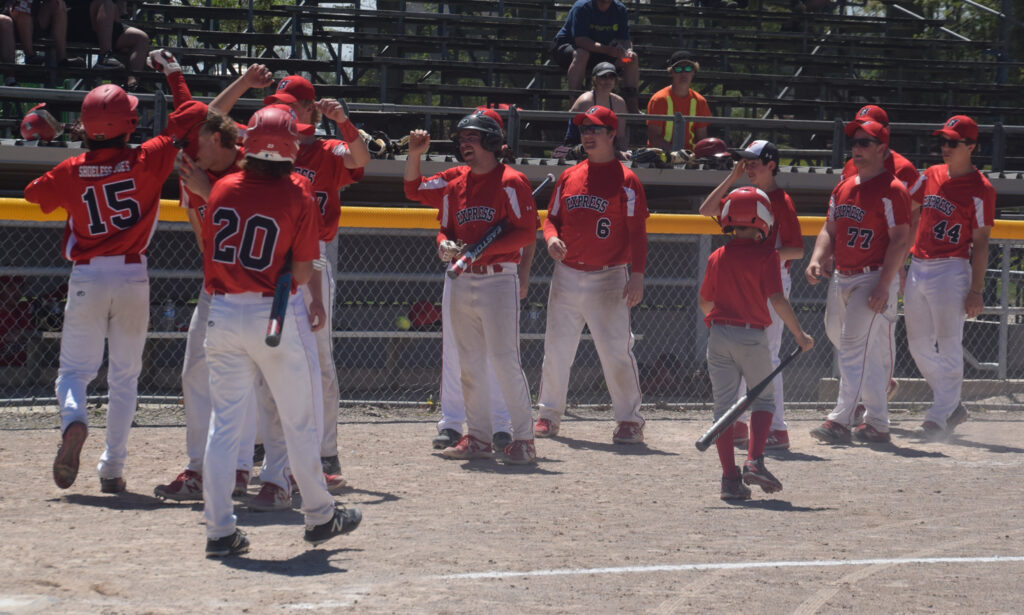 In the semifinals they held a 4-3 lead over the Kingston Axemen into the seventh before a costly error allowed the Axemen to come back to tie and force extras. Kingston would score two more in the ninth and hang on for the 6-4 win to end Napanee’s weekend.

“The Kingston Axemen, they’re a very great group of players that offered lots of helpful tips and instruction for us to get better during our game,” said Brooks. “You don’t get that very often from men’s team, it’s usually all about the win. They were helping us and working with our players. It’s very exciting to see those guys do that for our younger players.” 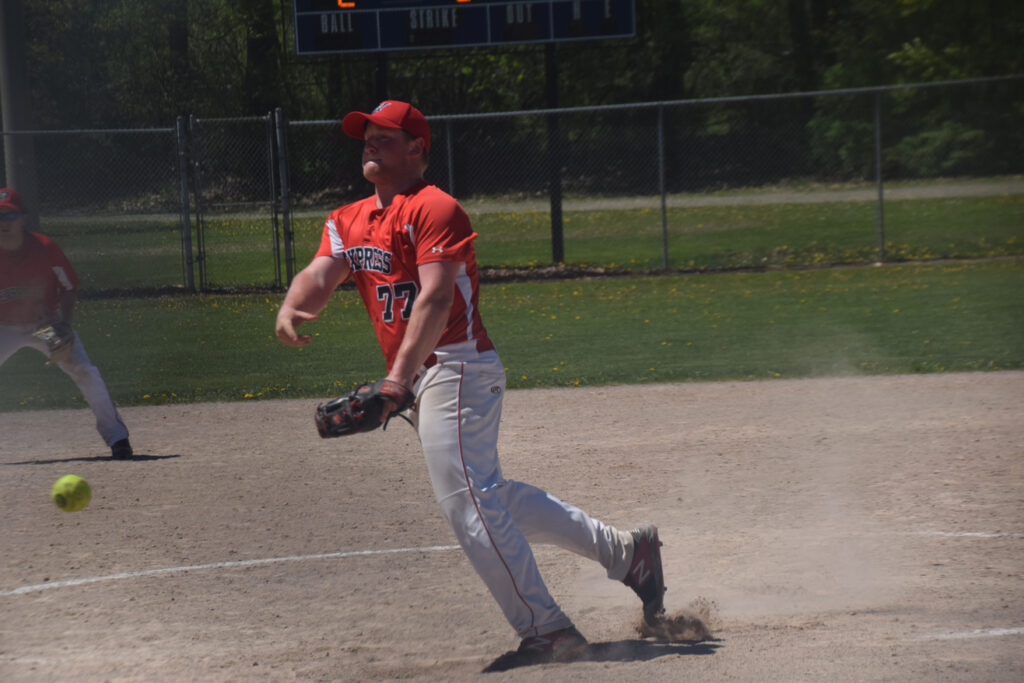 Connor Brooks opened the tournament with a no-hiiter. Photo by Adam Prudhomme.

Brooks says the tournament was a great opportunity for the players and coaching staff to get a feel for what the team needs to work on going forward. They’ll work on sharpening their skills throughout the summer in preparation of playing as the host team of the U20 Canadian Men’s Fast Pitch Championship, which take place Aug. 2-9 in Napanee. 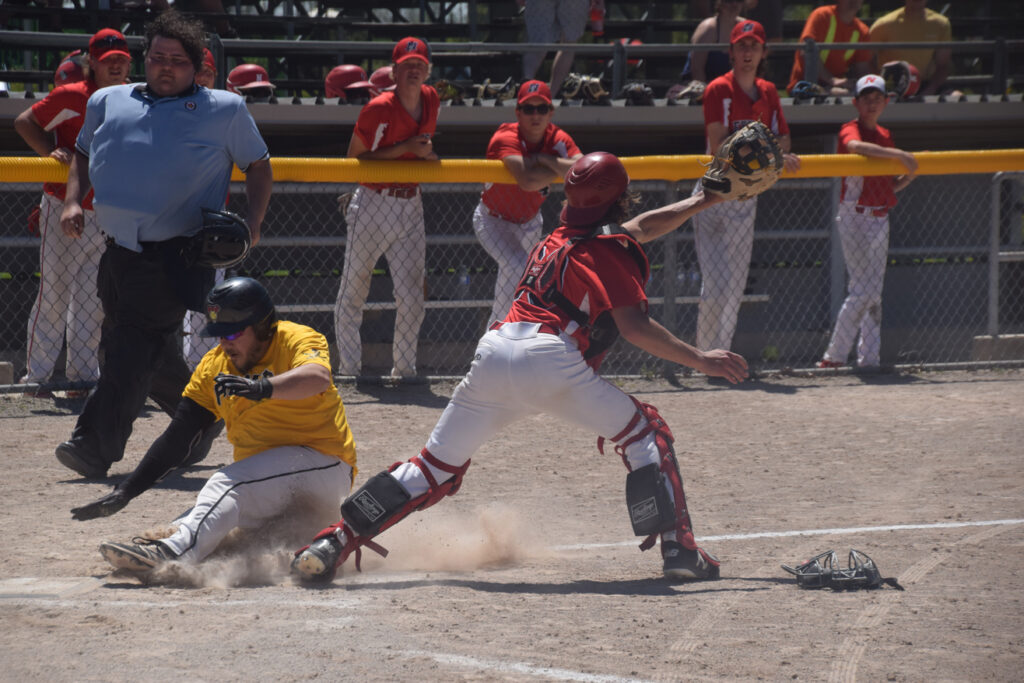 Brooks thanked the parents and fans that made the season opening tournament a success.

“To see the amount of people to come out and support the Napanee teams, and it’s all ages it’s not just ours,” said Brooks. “Any tournament we host there’s a lot of fan support in the community, I can’t say enough, that’s why we are the organizations that we are. It’s a community support system that makes being at the ballpark so much fun.”