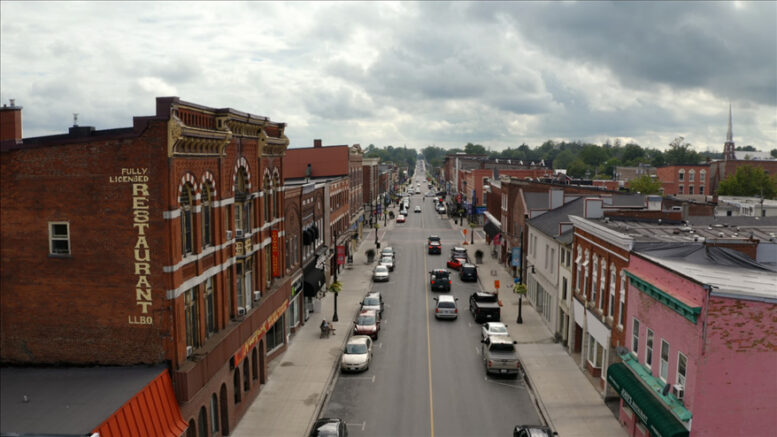 A screen shot of an upcoming TVO documentary Crossroads, which will explore Greater Napanee's retail and residential revival. The episode is set to premier June 27.

Greater Napanee will be the star of an upcoming TVOntario documentary Crossroads Beyond the Boom and Bust, set to air June 27 at 7 p.m.

Featuring a run time of about 40 minutes, the Napanee-centric episode is part three of a six part series. Titled Napanee: Downtown Rebound, the episode explores the setback of once being a downtown-shopping destination hit hard by the installation of Hwy 401, which completely bypasses the shops of Dundas Street.

“Home to Canada’s oldest furniture factory, Napanee’s downtown was a regional destination for shopping, banking and restaurants,” reads the episode’s synopsis. “But after the 401 was built, traffic and visitors were diverted away by the demand for the roadside convenience of chain restaurants, big box stores and multiple gas pumps – all geared to getting people back on the road as fast as possible. For years the town watched its downtown die as businesses drifted up to the highway. With a population of 5,000, Napanee got a second chance when it became the centre of the newly amalgamated Town of Greater Napanee. Getting visitors back to main street was kick-started by a surprising retail revival. Now the historic heart of Napanee is poised to transform with a residential and commercial development that reimagines the place for the 21st century.”

Filming was done last year and included interviews with mayor Marg Isbester as well as business owners Jefta and Cat Monster of Starlet, Joanne Burke of A Touch of Wellness, Jane Adams-Roy of the Waterfront River Pub and Terrace and Scott Sabramsky of Deadleaf Distinguished Gentleman.

“The Napanee story sort of evolved as we were there and the idea of having a whole downtown revitalization when you have a highway going through and you can become a suburb of another community and the historic downtown starts to becomes less important,” said Jennifer Horvath, executive producer of Crossroads. “It seems what’s happening in Napanee between Starlet and other businesses, we talked to Deadleaf, Joanne (Burke, owner of A Touch of Wellness) and also the whole Gibbard’s development is a super interesting thing to be happening in a community like Napanee. It just seems like such an innovative project.”

Retail is a major focus of the episode, but so too is the residential revival of the downtown core.

“I think the story evolved to become less about business owners and more about the community itself and new people who are moving in. It was a really interesting episode to work on,” added Horvath.

Other Ontario communities that will be featured in the series are Smiths Falls, Stratford, New Buxton, Cobalt and Vankleek Hill.