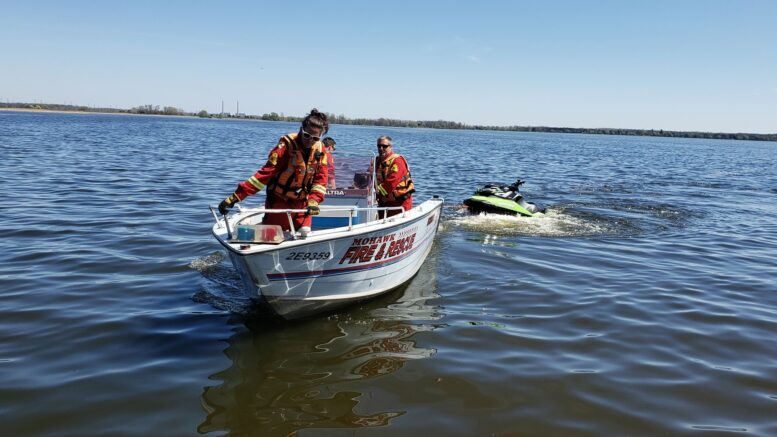 Mohawk Fire tows a capsized Sea-Doo to shore following a tense rescue on Hay Bay. All told three people were safely recovered from the water. Photo by Bill Hammond.

A rescuer was turned to rescuee during a tense recovery on Hay Bay Tuesday afternoon that saw three people safely pulled from the water with no injuries.

A couple on a Sea-Doo needed emergency assistance after their watercraft capsized. As crews from Greater Napanee Emergency Services, Mohawk Fire and the Canadian Coast Guard rushed to the scene, the pair were reached by a person in a paddle boat and brought towards shore.

After successfully bringing one of the passengers safely to shore, two people set out in the paddle boat to retrieve the Sea-Doo, only to have their boat capsize, plunging both occupants into the shockingly cold water. With GNES now on scene, fire fighters Robert Howe and Daly Chadwick swam 200 yards in station wear and PFDs to secure both people until they could get to shallow water and make their way to shore.

GNES deputy fire chief Bill Hammond credited everyone involved for wearing PFDs, which played a major role in everyone walking away from the dangerous situation unharmed.

Mohawk Fire was able to retrieve the Sea-Doo.

GNES credited the Bay of Quinte Mohawks for their response to the two emergencies for the use of their marine unit and crew.

This marked the second water rescue on Hay Bay in the last two weeks, fortunately both with happy endings.