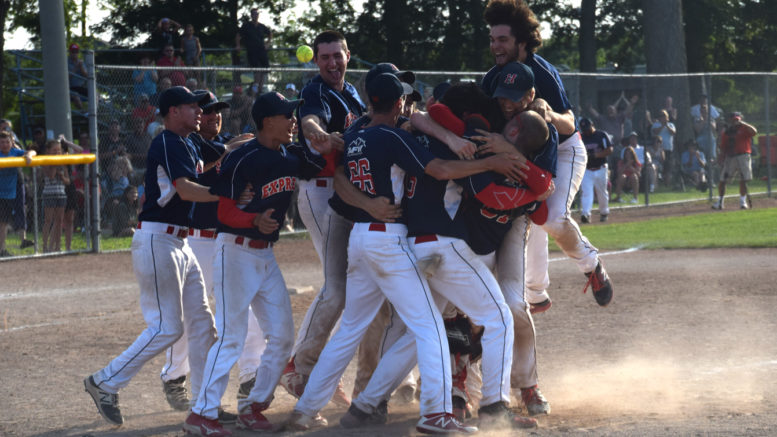 Members of the Napanee AFW Construction Express celebrate after defeating Chepstow in the gold medal game of the U19 Men's Fast Pitch Canadians, held in 2018. Napanee has been named host of the U20 championships for both this summer and 2023. Photo by Adam Prudhomme.

Napanee’s Fairgrounds will be Grand Central Station for Express softball this summer, playing host to several major tournaments, the biggest of those being the U20 Men’s Canadian Championships, Aug. 2-9.

Before then fans will have a chance to get to know the host team as Napanee’s AFW U20 Express squad will kick off the season on May 13, hosting a 10-team early bird men’s tournament.

“We’ve got teams coming from Hamilton, the Guelph area and as far as Quebec coming,” Express coach Cory Brooks said of the tournament, which runs through Sunday. “It’s a mixture of men’s, junior and midget teams. It’s good to be able to bring back a 10-team tournament to the area. Sometimes it’s hard to get teams to come to Napanee because we’re so far from the other side of Toronto where most of the ball is played.”

Teams will be divided into a pair of five team divisions. Napanee will compete in the Blue Division with entries from Quebec, Hamilton, Dundalk and Osgoode. Making up the Red Division will be teams from Quebec, Kingston, Micksburg, Owen Sound and Port Perry.

Each team is guaranteed four games, one against every team within their division. At the end of the four games the top two teams from each division advance to the semifinals with the winners of that matchup going head-to-head in the finals.

Napanee opens the tournament on Friday at 8 p.m. against Osgoode and then takes on Dundalk at 11 a.m. on May 14, Hamilton at 5 p.m. on that same Saturday before closing out the round robin against Quebec at 9 a.m. on May 15.

The full schedule for the AFW Express’ U20 Early bird tournament, taking place May 13-15 at the Napanee Fairgrounds.

The season opening tournament will be a good measuring stick for the Express, who have set the bar high for this season knowing they’ll finish the summer playing as hosts of nationals. Though that guarantees them automatic entry to the big dance, they still intend to compete hard all summer. They have every reason to expect to be a competitive club having won gold at eliminations, provincials and the Eastern Canadians last summer.

Napanee took on the hosting duties somewhat last minute, as Softball Canada’s plans to hold nationals in Newfoundland fell through late. That presented Napanee with the opportunity to not only host this year, but will do so in 2023 as well. That means great softball for a community that loves the sport. Brooks credited Softball Napanee’s executive for stepping up to the plate on sort notice to volunteer to take on the responsibility of organizing the national event.

“I’m very excited about what’s being offered to our community as well, all these young, athletes coming up through our organization,” said Brooks. “They’ll be able to see very high end ball at the U20 level for the next two years when we host the Canadians. This tournament alone this weekend has very high end players as well, players coming from all over Ontario and parts of Quebec.”

This weekend’s tournament and nationals in August won’t be the only major events held in Napanee this summer. Along with weekly league games, Softball Napanee will also be hosting the OASA U17 Boys Elimination Tournament, Canada Day weekend, July 1-3. And then July 22-24 the town will host the U15 Girls Qualifier.