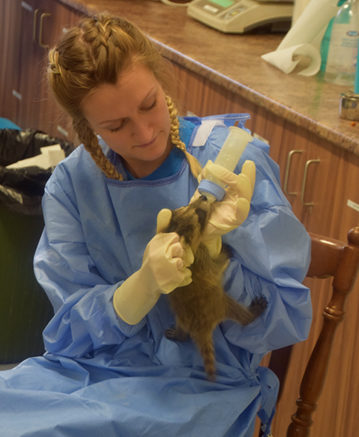 The Sandy Pines Baby Shower is slated for this upcoming weekend, May 6 to May 8. The event serves as an annual fundraiser and has been running since 2010. As with the past couple of years, this year’s baby shower will be held online.

Sandy Pines Wildlife Centre (SPWC) has been operating for over two decades on Sandy Pines Farm on Highway 2, just outside of Napanee. The centre’s mandate is to rehabilitate injured and orphaned animals and eventually release them back into the wild.

Apart from caring for over 6,000 animals in the past year alone, SPWC hosts educational events with the aim of spreading compassion about the many animals with which we share this world.

Associate Director, Leah Birmingham, spoke with the Beaver about the upcoming baby shower, some of the threats that lead to orphaned animals, and of course the importance of hosting the baby shower every year.

In the past, Birmingham noted they would open the doors of their facility and let people get a behind the scenes look at caring for orphaned animals. Normally, she pointed out, passersby agitate wildlife, but baby animals are more tolerant and able to cope with visitors.

“We would open the doors for ppl to see behind the scenes because we’re dealing with wildlife and we usually can’t let people tour because it’s stressful for the animals to even deal with us, let alone all kinds of strangers,” explained Birmingham. “So, we try to limit their exposure to us. At this time of year, with it being babies, they really can tolerate a lot more. They’re less stressed by humans. It’s a good time of year for us to display what we do in the spring season.”

With that in mind, Birmingham also noted spring and into summer is SPWC’s busiest time of year.

“Since we admit about 6,500 patients and the majority come in between May and September, usually we see a huge influx of patients at this time of year. We’ll raise somewhere near 400 squirrels, racoons, foxes, baby coyotes, porcupines…right now we have a tiny little porcupine in care. People get a chance to see that,” she said.

Birmingham discussed the benefits of having the baby shower virtually, noting it allows for a more in-depth approach to visitor tours.

“They can ask questions in the chat and see the animals more closely…before they’d have to gather around a doorway and wait for feeding times,” stated Birmingham.

Currently, the SPWC has baby ducklings, and are expecting baby songbirds starting mid May. But, as Birmingham explained, the number of baby creatures grows exponentially over the next few weeks.

“In nine days, we’ll be pretty close to a full house of everything, including baby bunnies and squirrels,” she said. “Some staff are so dedicated they actually take the squirrels home to feed throughout the night and then bring them back in the morning.”

Sadly, it is often humans that cause animals to be orphaned.

“A lot of times, it’s stuff that humans have done that has created a problem. It’s one thing if it’s nature, for example predatory prey, but its another if its humans that cause creatures to be orphaned due to our activities, for example disturbing nests,” she stated.

Birmingham added they always try to reunite the orphans with their family, but if that is not possible the orphans will find themselves in the capable hands of SPWC.

“Nests get disturbed due to construction, renovations, and general opening up of property in the spring,” said Birmingham.

When discussing trends that could be increasing the number of orphaned animals, Birmingham pointed out disease, in particular, Highly Pathogenic Avian Influenza (HPAI) that is sweeping its way around the world.

“HPAI is particularly detrimental to water birds, chickens and livestock. So, to prevent the spread of that, we decided not to open up SPWC to the public and inadvertently carry it in, thereby infecting the birds,” she said.

“The more pressure we put on wildlife populations as we sprawl and leave them less and less wild space, the higher the density of animals trying to use a smaller amount of space, wherein disease is more prevalent and more capable of crossing between species,” Birmingham explained.

SPWC runs entirely on donation, Birmingham pointed out, meaning the fundraisers they execute each year sustain them indefinitely.

“We desperately need this event to be a success. There’s no government funding for SPWC, even though they regulate how we deal with all these species together, they don’t give us any funding. So, we do have to rely on our community to support and typically they do every year at the baby shower,” expressed Birmingham.

Approximately the same number of people attend the baby shower virtually as have attended in person in the past, though Birmingham is careful to note SPWC does not raise the same amount of funds through their virtual baby shower.

“It does not raise the same amount of funds, but it’s still a fun way to engage with everybody,” she said. “Fundraising is the goal when you’re a non-profit, but just engaging with people and educating them on what goes on at SPWC is good too.”

Apart from getting to see adorable baby animals, visitors to the annual baby shower can partake in an online auction and 50/50 raffle. There will also be a jewellery sale and SPWC merchandise available.

“We’re putting as much together for the weekend as we can,” stated Birmingham, who noted there is a Facebook page dedicated to their online auction that will be accessible as of Friday, May 6.

“It’s been phenomenal to get that money for the wildlife but also make someone’s day,” she said.

The baby shower will take place is Friday, May 6, from 10 a.m. to Sunday, May 8 at 4 p.m.  Ontario Power Generation sponsors the festivities for the 12 year in a row.

SPWC monthly online 50/50 draw, which has seen previous winners take home more than $20,000.00, will be drawn at the close of the event on May 8.  Tickets can be purchased online only at https://www.rafflebox.ca/raffle/sandypineswildlifecentreapril

There will also be an online auction running for the entirety of the weekend. To access this, please visit: https://www.facebook.com/SPWCauction

For further inquiries regarding the SPWC Baby Shower please contact SPWC at 613-354-0264 or email: spwcbabyshower@gmail.com