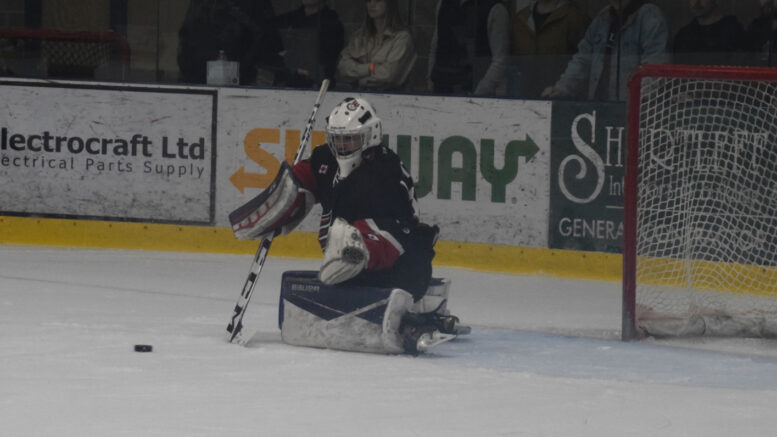 Clarington's Alex Lepizzera earned his second shutout of the series on Tuesday night to put the Eagles up 3-1 in the PJHL's Eastern Conference Finals. Photo by Adam Prudhomme.

The Napanee Raiders are on the brink of post-season elimination, down 3-1 to the Clarington Eagles in the best-of-seven PJHL Eastern Conference Finals.

Clarington jumped into the driver’s seat of the series after blanking the Raiders 4-0 in Tuesday’s Game 4 held at the Strathcona Paper Centre. Alex Lepizzera made 22 saves to record the shutout. Clarington did the majority of their damage within the opening six minutes of the second period as Jordan Shaw scored in the opening two minutes of the frame, the first of the game and the goal that would hold up as the game winner. Dawson Manning doubled the lead two and a half minutes later before Owen Manarin scored the third goal at the 5:22 mark. Manning would tack on a fourth goal, this one of the empty net variety, with less than five minutes to go in the third to round out the scoring.

Napanee now faces the challenge of having to win three straight if they’re to keep alive their hope of repeating as Schmalz Cup champions. Game 5 of the series will go Thursday night at the Eagles’ Garnet B. Rickard Recreation Complex. Puck drop is 7:20 p.m.

A road win would allow keep the Raiders’ season alive for a Game 6 showdown at the SPC on Sunday. Puck drop would be 7:30 p.m. A winner-take-all Game 7 would go May 3 in Bowmanville.