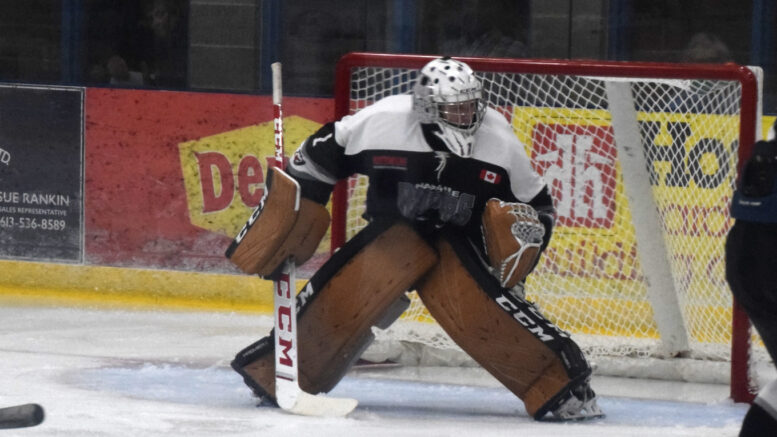 Napanee's Bailey Maracle made 39 saves to help the Raiders to a 4-2 win Sunday night and get them back in their series, now down 2-1 to the Clarington Eagles. File photo.

A trio of goals in the final five minutes of regulation powered the Napanee Raiders to a desperately needed 4-2 road win over the Clarington Eagles in Game 3 of the PJHL’s Eastern Conference Finals on Sunday night.

The win keeps the Raiders fro falling into a 3-0 hole in the best-of-seven series, instead now down just 2-1 and heading home Tuesday night for Game 4 at the SPC.

Noah Westwater gave the Raiders a 1-0 lead Sunday night, scoring just a few second shy of the midway mark of the first period.

That lead held until the second when Clarington responded with two of their own. The first came from the stick of Nathaniel Stirling at 3:48, the second from Leyton Aitken at 14:59.

Down a goal and facing the notion of being pushed to the brink of elimination, the Raiders responded with a huge third period.

Aidan Johnson notched the tying goal at 15:49 of the third. A mere 18 seconds later Matthew Sheehy put the Raiders back in front 3-2.

The Eagles made a late comeback effort but it was thwarted when Napanee’s Johnny Wright potted a huge empty net goal with just 29 seconds on the clock to secure the 4-2 win.

Bailey Maracle picked up the win with 39 saves. Alex Lepizzera took the loss, finishing with 40 saves.

Napanee will look to even the series on Tuesday night back at the SPC. Puck drop is 7:30 p.m. Game 5, will go Thursday back at the Eagles’ Garnet B. Rickard Rec Complex at 7:20 p.m.