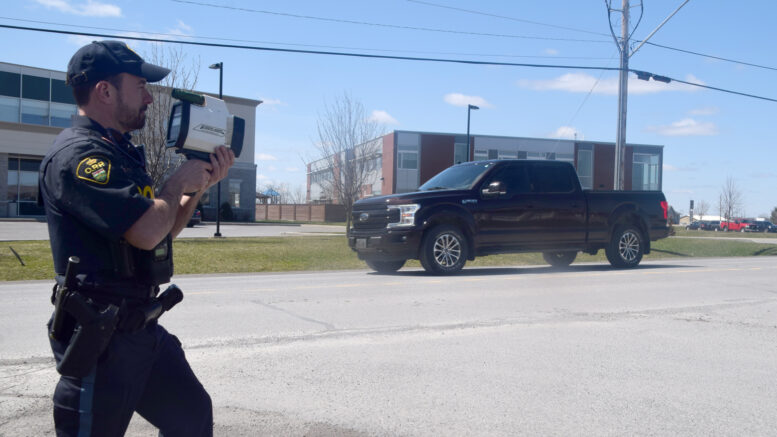 Cst. Jake Pridham of the L&A OPP shows off a Lidar, which is used to measure a vehicle's speed from up to 200 metres away. Photo by Adam Prudhomme.

Lead foot drivers in Lennox and Addington be warned, the local OPP detachment is stepping up its traffic enforcement.

Earlier this month the L&A OPP officially launched its revamped traffic department, adding four new officers who will be dedicated to the road safety beat.

The beefed up unit debuted just ahead of the Easter long weekend.

Road safety will be their general focus throughout the year but they will also have targeted campaigns. For instance during the Easter long weekend they kept a keen eye out for motorists not wearing their seat belt. A total of 30 charges were laid in the region relating to seat belt infractions, part of over 1,200 seatbelt charges laid across the province. Other campaigns will crack down on distracted driving, impaired driving, speeding and serve as a reminder to drivers to move over when they see flashing lights on the side of the highway.

“The traffic unit isn’t just dedicated for campaigns,” said Semple. “It’s going to be a seven day a week unit. There’s been four new officers from the detachment assigned to the unit, on top of Scott Woodward who is already our traffic management officer. The idea came about because of our own awareness and watching what’s going on in the community and looking at collision data and looking at personal observation. It’s disturbing to see the level of compliance in our community with traffic laws. We know that that’s leading directly to the causation of collisions in our area and making our roads not as safe as I would like them to be.”

Semple says just about every officer at the detachment has been assigned traffic duty at one point or another. When studying the traffic data for the region however, Semple decided it was time for the detachment to put together a team of officers who showed a penchant for the specialized skill of enforcing traffic laws.

“This is a busy detachment that does many other things other than patrolling the over 1,000 km of roads that we have in our detachment area and a significant portion of the 400 series of highway,” said Semple. “It becomes difficult sometimes to focus on traffic alone and you get torn away doing other investigations, other demands on your time, so I felt it was about time that we made a serious commitment towards traffic enforcement in L&A County, which includes part of Hastings County as well.”

Advances in technology have also come along way to make the officers’ jobs just a little easier. That includes everything from enhanced radar guns to machines that can scan a license plate and instantly bring up the driving record attached to the owner of the vehicle. That could spell trouble for anyone who attempts to talk their way out of a ticket-officers can now see how many times a driver has been warned and will be more likely to issue a ticket to chronic offenders.