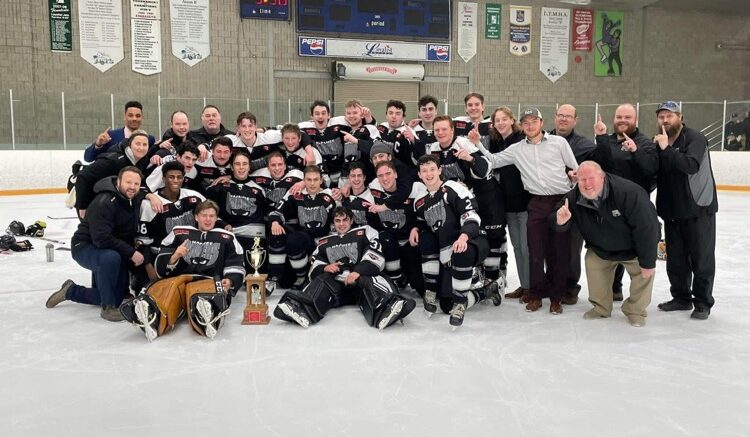 The Napanee Raiders celebrate with the Tod Division trophy after defeating the Amherstview Jets in Game 7 at the W.J. Henderson Arena. Photo by Melanie Bramburger.

Noah Westwater netted the golden goal for the Napanee Raiders, scoring in overtime to secure a 4-3 win over the Amherstview Jets in Sunday’s Game 7 of the Tod Division Finals at the W.J. Henderson Arena.

Westwater’s goal came 4:08 into the extra frame, giving Napanee its second straight league title, dating back to the 2020 season.

Overtime seemed like the only fitting conclusion to this rivalry, which had been a back-and-forth affair all season and spilled over into the playoffs. The playoff series was a reflection of the season with the two clubs appearing evenly matched right up until the final whistle.

Ben Chubbs gave the visiting Raiders an early lead in the do-or-die Game 7, scoring just over seven minutes into the first.

Amherstview’s Zackery McMahon responded with the tying goal four minutes later and then gave his team the lead in the dying seconds of the first period.

Down a goal with 40 minutes left in their season the Raiders were able to rise to the occasion. Aidan Johnson notched the tying goal midway through the second and Soren Zamuner gave Napanee the lead two minutes later. Napanee would hold their 3-2 advantage heading into the final intermission.

This time it was Amherstview who was forced to rally to keep their season alive. Caden Kekewich was there to answer the call, notching the equalizer in the opening five minutes.

When the final 15 minutes produced no winner, the game shifted to overtime. For a few fleeting moments it appeared as though the Jets had won the series when a flurry of activity in front of the net saw the puck find its way into the back of the Raider net. The celebration was short lived however as the refs determined the net had come loose before the puck crossed the line.

That left the door open for Captain Westwater and he delivered, his sixth of the postseason and biggest of his Raider career to power the team to repeat as league champions and keep their even bigger goal of repeating as provincial Schmalz Cup champions alive.

Bailey Maracle picked up the win in net, turning away 36 shots. Ethan Babin took the loss, stopping 32 of 35.

The sudden loss ends the Jets season, which saw them finish first in the division for the first time since 2008.

With the win the Raiders advance out of their league and into the Eastern Conference of the Schmalz Cup.

Napanee is right back on the ice Thursday as they hit the road to take on the Clarington Eagles in Game 1 of that best-of-seven series, which gets underway at 7:20 p.m. Friday night the series shifts to Napanee for Game 2. Puck drop is 7:30 p.m. at the SPC. The winner of this series advances to a round-robin style tournament against the four conference winners from May 7 to 13 followed by semifinals on May 14 and the winners advancing to the finals on May 15.