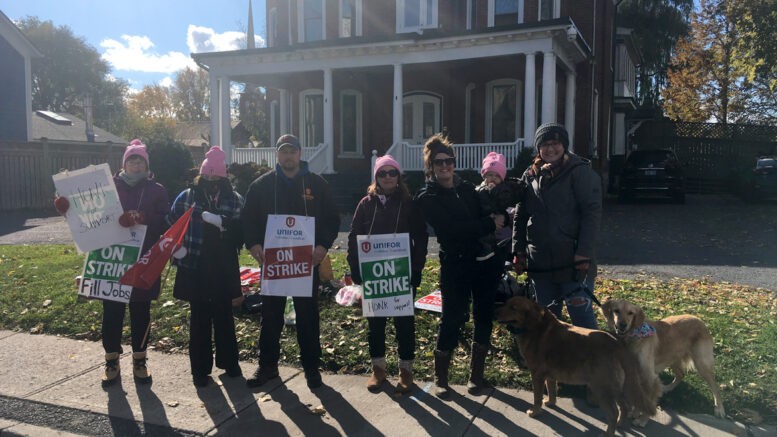 Contrary to a press release issued by Unifor last week, a deal between striking Lennox and Addington Interval House (LAIH) union employees and the LAIH board of directors is yet to have been ratified by both parties.

“Our board hasn’t even ratified the agreement yet,” said Weir. “There’s lots of kind of procedural things that are a bit odd. We’re not sure that the path forward is as clear as the victory party presented by the other side seems to make it appear.”

On March 29 post to Unifor’s official website-the union that represents the approximately 20 employees at the Napanee-based shelter for women and children escaping domestic violence-stated a deal had been reached to end the strike that began on Oct. 29.

Their full statement can be seen here: http://www.napaneebeaver.ca/2022/03/29/lennox-addington-interval-house-employees-reach-deal-to-end-five-month-strike/.

Weir says their statement isn’t accurate, as the union claims to now be accepting a deal they originally turned down back in February.

“Our lawyer got a call from Unifor’s lawyer to say that the group had ratified Offer 7,” said Weir, noting the call was completely unexpected given that other deals had been made since this one had been rejected.

“They had already turned the offer down. It is a strange kind of process.”

The board is expected to meet later this week to discuss the matter and while it is possible a deal could soon be reached, as far as LAIH is concerned, nothing has been officially agreed upon.

“On March 29, 2022, Unifor Local 414 advised the Lennox and Addington Interval House that they had accepted an offer previously submitted by Interval House on February 8, 2022 and that the strikers ratified the offer. This offer had been previously rejected by the Union so it was surprising that they now agreed to accept it. The Union conducted a ratification vote, without notice, to Interval House and the Union did not enter into a signed agreement with Interval House before conducting a vote.

The Union had rejected previous offers to settle from Interval House, which were better than the one they accepted and ratified. During the course of the 5 month strike commenced by the Union, the behaviour of some picketers has been quite concerning, extending well beyond the concern for safety generated by the persistent picketing at the site of the emergency shelter. A representative of the Union was recently charged with an offence under the Criminal Code.

The Interval House Board of Directors is considering whether to treat this as a ratified collective agreement, in light of the circumstances.

We are proud that the shelter continued to operate and provide services to vulnerable women and children in our community, during the strike. We further commend our Executive Director and staff who worked tirelessly to provide needed services.”

When reached for comment Katha Fortier, assistant to the Unifor national president replied: