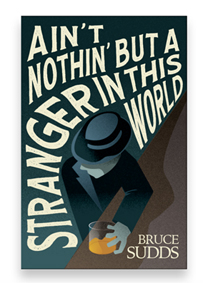 Napanee author Bruce Sudds' A'int Nothing But A Stranger In This World was published in March.

Ain’t Nothin’ But A Stranger In This World by Napanee native Bruce Sudds was recently published by AOS Publishing of Montreal. In celebration of this, Sudds took some time to talk about the process of writing his novel and the impetus behind it.

Sudds maintains that while this novel may be his first foray into publishing, it’s a story that was begging to be written for some time.

“I would say it took me some 20 years to commit to writing this book. But once I did, it sort of poured out of me. It was quite painful at times, to be honest, but when I really made myself write, it came to me, and I’m thankful for that,” said Sudds. “There’s an old quote that, ‘writing is easy, you just sit at a typewriter and bleed,’ and at the risk of sounding overwrought, that’s really what writing this book was like. I had to face a lot of difficult issues but in doing so, I hope I created an honest and interesting book. And personally, I’m better for it.”

Though the novel is technically fiction, it is based on actual events that Sudds experienced. In writing his novel, he describes wrestling with the subject matter in his book.

“In all honesty, Ain’t Nothin’ But A Stranger In This World is a work of fiction but it’s based on actual events. And I was involved in those events,” said Sudds. “To add a little more honesty, I was dealing with a trauma many years after the original incident and in doing so, I realized that this is the first subject I needed to address as a writer.”

Sudds described the ability to finally write about his experiences as having a cathartic effect.

“As the narrator notes in the book, I had been struggling as a writer and it was because I was resisting the tale in the novel.  This was the first book I had to write and I’m really thankful I did so. I’m proud of it and it seems that many readers are also enjoying it. It was a painful process, but it delivered an enduring cure and some hard-won knowledge that has truly brought me a great deal of peace.”

Sudds described being influenced by a range of authors from Cormac McCarthy to Kurt Vonnegut.

“The first writer, as a young man that really resonated with me, was Kurt Vonnegut. And Vonnegut shows up in Ain’t Nothin’ But A Stranger In This World. I think he was interested in the inner lives of men. Especially men under duress, or those that are haunted by something from their past,” Sudds noted. “He also showed such compassion, imagination, and humour when dealing with these daunting issues.  As a writer, it really resonated with me, and as a person with a few issues myself, it provided a certain comfort.”

Sudds added that Vonnegut’s use of magic realism influenced his own writing style. He also mused on the nature of plot in literature today, lauding McCarthy’s use of plot to advance his work.

“I love McCarthy’s direct language and his use of plot. It seems funny to say but it feels like plot has become unfashionable and I think it’s vital. Otherwise, I find the world of the book stays in the doldrums. And that can be a good device at times but I think that it’s maybe done too often today and undermines the author’s intentions,” stated Sudds.

Whether speaking of Vonnegut-or others, like Henry Miller-Sudds expressed an affinity for authors who, like him, write in order to deal with trauma.

Given the importance of place in Sudd’s debut novel, he pointed to fellow authors who came before him and inserted the culture of Southern Ontario into the literary world, such as Al Purdy and Alice Munroe.

“Al Purdy was one of the first poets I truly admired and still do. And in many ways, I think he’s one of the first great writers of Canada. I feel fortunate that he wrote of this place in some of his pieces. In doing so, he let me see that his place was worthy of attention. I could sense that but I think he helped give me the confidence to pursue our local culture as a subject,” Sudds explained. “Alice Munroe was the same for me. Her books often take place in Southwestern Ontario and I felt that she wrote so well about such a similar world that it was a real gift, as rural Ontario is rarely captured in art and I think Purdy and Munroe were masters of it.”

From the air we breath to the soil we walk on, Sudds pointed to the importance of place in influencing literature in general and particularly on his own writing.

“I was born in Napanee and after my parents moved around a bit for my dad’s career, we settled in the area. My family, on both sides, has been in the area for generations. And I really feel compelled to write about this region. The story is largely set in Eastern Ontario from the late seventies to today.  And I do think it has a significant impact on the book,” said Sudds. “There’s a school of thought that suggests landscape or place, is one of the most underestimated influences on culture, and I agree with that. We do face extreme temperatures, lakes, rivers, forests, and limited arable land. And I think this informs our views.”

Not losing his momentum, Sudds noted his next novel is nearly complete, with several more planned already.