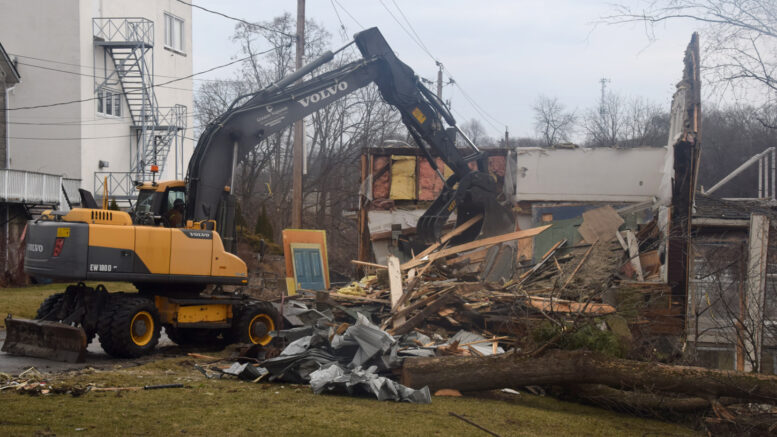 Greater Napanee staff tear down an abandoned home at 18 Water Street which was found to be structurally unsound and contained mould. Photo by Adam Prudhomme.

One of Greater Napanee’s oldest buildings was demolished by town staff on Thursday.

Located at 18 Water St. on the banks of the Napanee River, the yellow-sided timber house was built prior to 1855 and pre-dated town hall, the old post office and the courthouse.

Council purchased the green space property attached to the house in 2015 with the intent of building a walkway alongside the river that will connect to the Centre Street bridge. After having the house inspected by contractors, it was recommended that the house be demolished due to structural damage and the presence of mould. In early 2016 the town granted the Greater Napanee Heritage Committee 60 days to explore and research the house to determine if it carried any historical significance. Structurally speaking, the house itself offered little to talk about. Though it is old, much of the interior and exterior has been re-done over the years. The previous term of council then moved to have the building torn down and the current council reaffirmed that motion. On Thursday the plan was put into action as an excavator was used to knock down the structure and dump trucks carried the rubble to the South Fred Waste Disposal Site. 18 Water Street, as seen from the bank of the Napanee River. Photo by Adam Prudhomme.

While awaiting a final decision on the building back in 2016, the Greater Napanee and Area Arts Association did their best to spruce up the abandoned building, affixing colourful murals to the cover the windows and doors of the house. Ideas such as turning the home into a tourist office or seasonal art gallery were discussed over the years but ultimately ruled to be too expensive. Any plans to make the open the building to the public would involve not only costly repairs to address the structural issues of the home, but also require expensive renovations to make it fully accessible. In 2016 a plaque was installed to the front of the building by the Greater Napanee Heritage Committee to detail some of its history. Photo by Adam Prudhomme.

Prior to the demolition town staff was able to relocate several perennial plants that had been growing in the garden outside the home. Those plants were distributed to community gardens throughout the township.