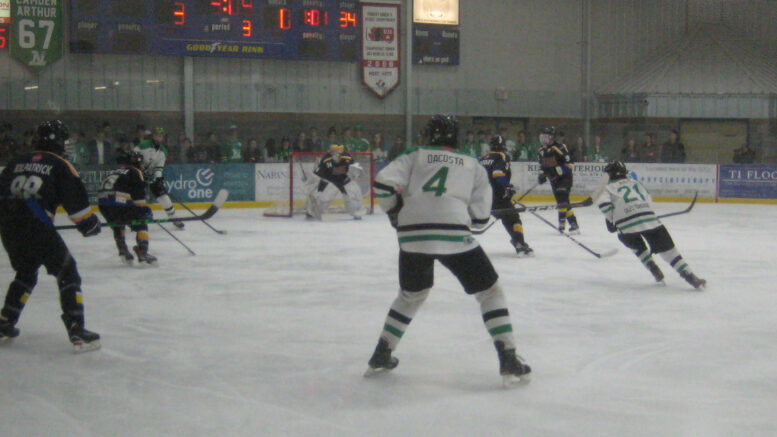 The Napanee Desjardins Insurance U13s have advanced to the provincial OMHA Finals in Barrie this weekend with a perfect 4-0 record. Facing Brighton, they won 6-3. Wes Davey put them on the board with a quick shot. Jack Sutton tallied from a scramble on the power play. Colton Lockridge, killing a penalty, found a loose puck, and walked in to go high glove side. Ben Kerr added to the onslaught going high on the blocker side. Finding the goalie without a stick, Lockridge took advantage, again short handed. With less than 90 seconds left, Lockridge completed the hat trick on the power-play, set up by Kerr. They outshot Brighton 34-14.

-On Sunday, the U18 Stars also booked their place in the OMHA Championship, theirs in Windsor this weekend. They defeated Stirling 3-0 in a well played game. Spencer Cranley got the short-handed winner early in the first, as he picked up a puck at his own blueline, broke away, and shot high blocker side. Jayden Holden earned an assist. With three minutes left in the first, Holden buried Marshall Maracle’s rebound. Seconds later, Holden set up Maracle for insurance. Ryan Aldridge earned a shutout in net; the shots favoured Napanee 25-16.

Earlier, the boys needed a win last Thursday, and they came to avenge their earlier loss to Frontenac winning 4-1. Trailing by one, Cranley scored during a two-man advantage early in the second. When a Frontenac defenceman fell, it gave Austin Catena all the space he needed to fire one high over the netminder. Ethan Boutilier moved in from the point during a power play for an insurance goal, and Tyler Brady iced the game. Shots favoured the Stars 39-9.

-The U11s wound up their season with a 5-3 loss to Stirling. Although shots on goal favoured Napanee 45-14, a win was not in the cards. Scoring for Napanee was Cooper Plumley, Maddux Hartwick, and Chase Castignier.

-The Conger’s Plumbing U13 AEs hosted Tweed with pride on the line, and the locals edged the visitors 5-4. The score went back and forth with goals by Jadon McNamee (a hat trick) and Quinn McConnell. Then with 3:30 left, Jacob Lyons got the winner to close out the game and the season.