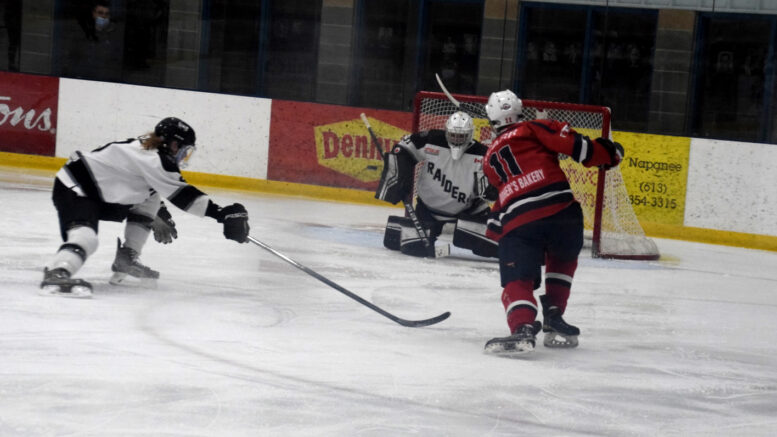 Napanee Raiders' goalie Preston Swan-Merrison makes a save against Campbellford's Benny Scarr during Friday's game at the SPC. Photo by Adam Prudhomme.

An offensive power outage saw the Napanee Raiders close out the regular season with a pair of ties, cementing a second place finish ahead of the Tod Division playoffs.

On Friday they battled to a 2-2 draw at home against the Campbellford Rebels, stymied by an outstanding performance from ex-teammate Mitchell Bown, who finished with 66 saves on the night. He held the Raiders scoreless through the opening two periods before Ben Chubbs scored 15 seconds into the third.

Chubb’s goal tied it at 1-1 as Campbellford’s Cullen Pollack had scored in the opening five minutes of the game. The Rebels re-took the lead at 7:23 courtesy a goal from Benny Scarr before Chubbs notched the equalizer with just over a minute to go in the third to send the game to overtime. Extra time solved nothing and each side settled for a point in the standings.

Failing to secure two points meant the Raiders were locked into second place regardless of their regular season finale in Port Hope on Saturday.

The Panthers came into the game locked into fourth place, meaning neither side had much to play for. The result was a 1-1 draw, with Matthew Sheehy scoring Napanee’s lone goal at 13:05 in the second. Evan Wright responded for Port Hope in the third to round out the scoring.

Sam Dingle stopped 46 shots for the Panthers while Bailey Maracle finished with 36 saves for Napanee. In the end the Raiders’ inability to pick up four points this weekend was moot as the Amherstview Jets recorded two wins this weekend to clinch first. Napanee entered the weekend needing to win both games and hope the Jets at least tied one of their final two games for a shot at first overall. By virtue of their top two finish, both the Raiders and Jets will enjoy a first round bye while the await the results of the quarter-finals.

The third seed Picton Pirates will take on the sixth seed Frankford Huskies in their best-of-seven, which kicks off Thursday and would go to March 20 if it goes the distance. In the other bracket, the fourth place Panthers take on fifth place Campbellford. Their series gets underway tonight with Game 2 scheduled for Tuesday. If it goes the distance, the series will wrap up March 19 in Port Hope.

The Jets will face the lowest surviving seed in the semifinals while the Raiders face the higher seed.

Napanee finished the 30 game regular season with a record of 22-4 with four ties. Their 125 goals for place them tied for second in the league with Picton, both trailing the 151 goals produced by the Jets. Napanee’s 57 goals allowed were the lowest in the league, followed by the Jets (71) and Panthers (85). The Jets led the way with a +80 goals for and against, followed by Napanee’s +68.