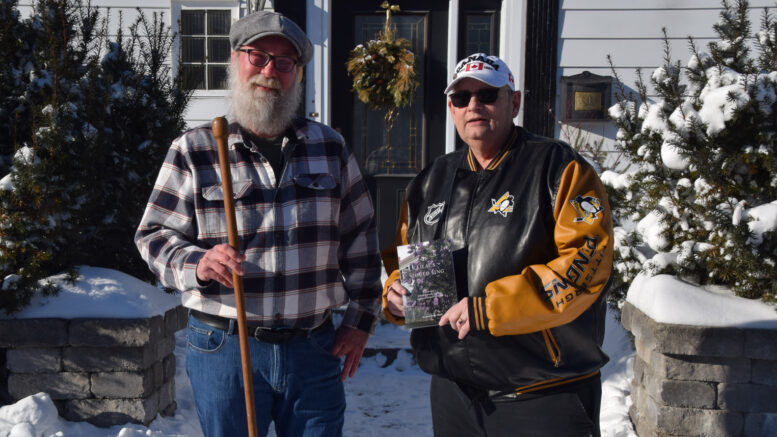 Songwriter Steve Medd (left) accepts a cane made from the hull of the Quinte Steamer, which was recovered by John Blakely's (right) grandfather after it sunk off the coast of Deseronto. Photo by Adam Prudhomme.

For decades John Blakely has housed a small piece of one of this region’s most famous shipwrecks.

Just feet from his bed was a cane constructed out of wood from the hull of the Steamer Quinte, which travelled the Bay of Quinte and Lake Ontario from 1871 to 1889.

In 1889 a fire caused it to sink off Grassy Point, three miles west of Deseronto, killing five people on board.

Blakely’s grandfather owned the farm directly across from where the ship sank.

“I can remember my grandfather telling me the stories about how a lot of the survivors were brought to his shore and they brought them up to the house,” recalled Blakely.

Sometime later his grandfather dove to the bottom of the bay to retrieve a piece of the hull that he later fashioned into a cane.

That unique piece of history has been in Blakely’s family ever since until earlier this month when he gifted it to Napanee singer-songwriter Steve Medd. Blakely was moved to do so after hearing Medd’s song The Ghost of Captain Christie of the Steamer Quinte.

Cpt. Christie was at the helm that fateful night in 1889 and is credited with saving countless lives. Of the five people who perished when the ship sank one was the captain’s mother, another his brother.

“This means a lot to me because Cpt. Christie is a local hero of one of the great steamers of the day,” said Medd. “He risked his life.”

Medd shared the song in a Facebook group dedicated to local history.

Upon hearing the song, Blakely decided to gift the cane to Medd. The only problem was he couldn’t find it. After searching his house high and low he finally remembered he’d put it in a spot he could see from his bed and one he walked by on a daily basis.

“I put it where I would remember it then I couldn’t find it,” he laughed.

Before giving it away Blakely checked with his 98-year-old mother, who lives in the Riverine, if it would be all right. When she heard the story she was delighted to hear it was going to a good home.

In late January Blakely met Medd at his home in Napanee to deliver the cane.

“The story continues, it’s almost like you’re handing me a baton, now I can pass that on to someone else,” said Medd.

In 2019 Medd released a book, If Lilacs Could Sing, which features a collection of ballads he wrote with ties to the Greater Napanee, Quinte and Kingston region. The Ghost of Captain Christie is included in the book, as are photos of his headstone in Picton’s Glenwood Cemetery that Medd visited three years ago.

“I trudged all around the cemetery and finally I came across it and to my horror it had been desecrated,” Medd said of the captain’s final resting place. “The entire Christie family plot had been desecrated, headstones were knocked over. I wasn’t sure it was him, but then I saw on the ground his footstone, clear as a bell, Cpt. Christie. Then beside it was the footstone of his two wives. I was so moved I just thought how could a hero like this be so mistreated after death?”

Medd hopes by telling his story, along with safe keeping artifacts such as the cane, it will keep the history alive for the next generation.

“I think anything physical that might remind you of the past is very important,” said Medd. “There’s often this belief with some people of in with the new, out with the old, but I think it’s important to hang on to the old and try to incorporate it into the new.”