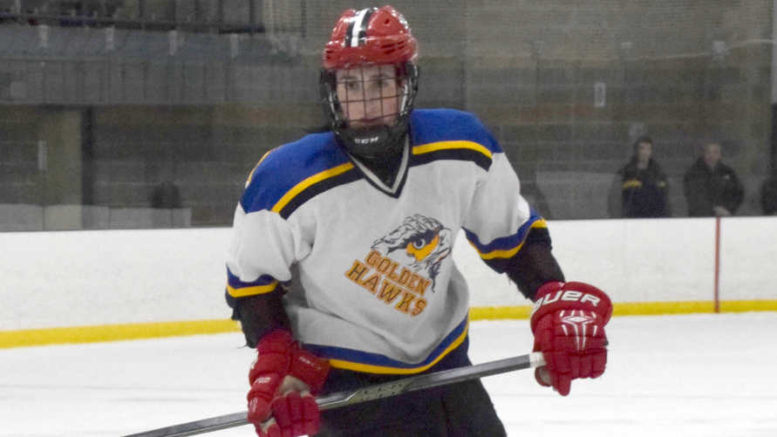 Napanee’s Emmet Pierce will be staying close to home for his post-secondary hockey career, committing to Queen’s University Golden Gaels for next season.

Pierce is currently in his first season with the Ontario Junior Hockey League’s Wellington Dukes, serving as the team captain. In 33 games he has 36 points (18 goals, 18 assists), placing him in the league’s top 25 scorers.
The 6’6 forward from joined the Dukes at the beginning of the season after spending three years with the OHL’s Flint Firebirds. In 79 career OHL games he had 14 goals and 17 assists. 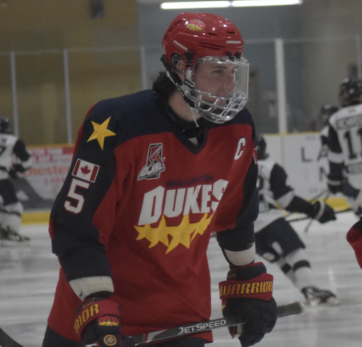 Emmet Pierce is currently captain of the Wellington Dukes. Photo by Jason Parks.

According to the Dukes’ team website, Pierce was expected to bring leadership and a strong offensive game to the Dukes and he hasn’t disappointed. Along with wearing the ‘C’ he has lead the Dukes in scoring for most of the season.

Queen’s University has a storied hockey program and is typically recognized as one of Canada’s top academic institutions, something that Pierce noted played a big part in choosing to commit to the Golden Gaels program.

“I am honoured to get the opportunity to attend such a prestigious school and play for such a well respected hockey program,” Pierce said in a release posted on the Dukes’ website. “I’m also really excited to get to stay close to home and play alongside some former teammates”.

“Emmet is just scratching the surface with his potential in hockey,” Smith said, according to a release from the team. “Obviously the past couple of years haven’t been easy on anyone, but especially for Emmet who was looking to carve out a great career in the OHL. He continues to get better each and every week as you can see how great he’s been for us this season. He is going to have a great career after junior hockey. We are lucky to have him in Wellington as he is not just our leader and captain but one of the best people I have met in the game of hockey.”

Pierce becomes the fourth member of the Dukes to commit to a USports program for next season following Mason Reeves (Toronto), Brodie McDougall (York), and Graham Dickerson (Toronto). Pierce won’t be the only alumni of the Dukes that laces up for Queen’s next season as he will join former Dukes goaltender Anthony Popovich on the Golden Gaels roster.