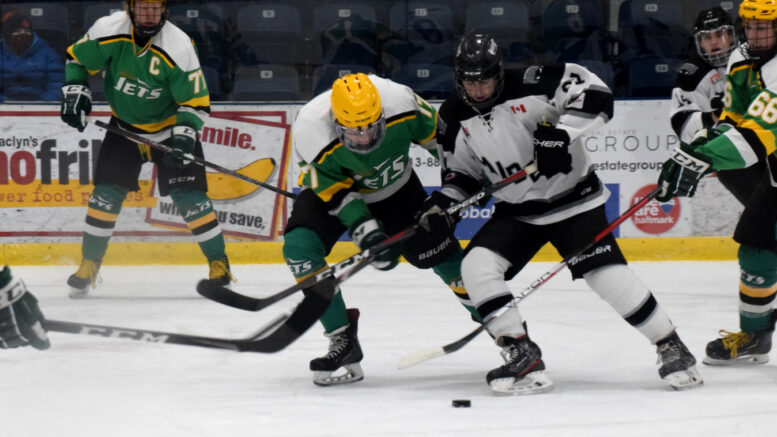 Returning to the ice for the first time in 55 days due to provincial COVID-19 protocols, the Napanee Raiders showed no signs of rust as they picked up a pair of weekend wins.

At home on Friday they picked up a tidy 4-1 win over the Campbellford Rebels and then blanked the Frankford Huskies 7-0 on Saturday night.

Friday’s game saw them square off against a familiar face behind the mask as Mitch Bown, who began the season with the Raiders and posted a record 8-1 in nine games, was between the pipes for Campbellford.

He held his former teammates scoreless for much of the first before Matthew Sheehy broke the shutout with just over two minutes to go in the period, his ninth of the year.

His teammate Beckett Palmer-Stephen scored 13:35 into the second, also his ninth of the year, his first of three on the night.

Jacob McPhee scored Campbellford’s lone tally of the game at 15:20 to cut the deficit to 2-1, but Palmer-Stephen responded just over two minutes later and completed his hat trick at the midway point of the third to seal the win.

Bailey Maracle earned the win with 24 saves while Bown finished with four goals allowed on 40 shots.

The next night the Raiders cruised to victory over the last place Huskies in Frankford, scoring twice in the first and second and adding three more in the final frame while out-shooting the home team 47-17.

Ben White scored a pair while AJ Hess, Connor Brooks, Soren Zamuner, Chris Edwards and Reid Lambert had one each.

Preston Swan-Merrison earned the shutout, the first of his Junior C career. He improves to 2-1 with a 2.67 GAA.

Napanee will be back at it on Friday night when they welcome the Picton Pirates to the SPC for a 7:30 p.m. puck drop. On Saturday they head to Port Hope to face the Panthers.