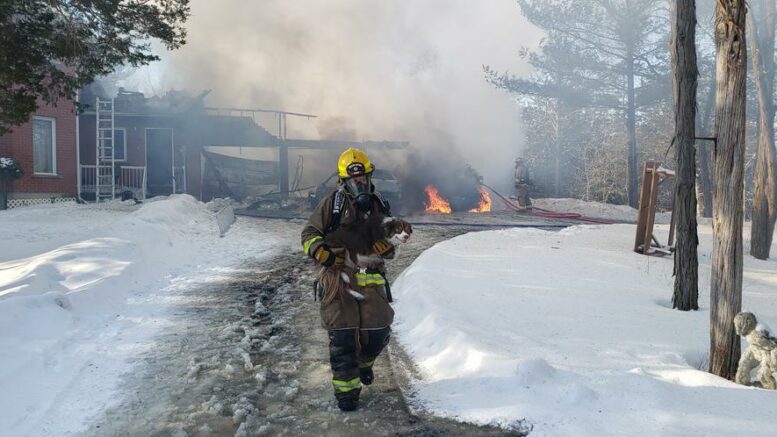 A GNES firefighter rescues a dog from a fire on Bridge Street. Photo by @DeputyChief812

Firefighters from all three of Greater Napanee Emergency Services stations responded to a garage fire attached to a home on Bridge Street on Sunday morning.

According to GNES deputy fire chief Bill Hammond on Twitter, one occupant and a dog were rescued from the home. Firefighters used a deck gun for the initial fire knock down and used hand lines to keep the fire from spreading to the roof and house.

“A lone occupant at home at time of fire was in garage when fire started near his four wheeler which he had just started. (Which sparked a fire and spread quickly.),” Hammond wrote in an email to the Beaver. “Owner stated he attempted to use an extinguisher to no avail and went to retrieve his dog and call 911. Upon arrival the owner was found to be missing and had re entered the structure in attempts to get his dog. Contact was made with the home owner who was able to exit the structure before heavy smoke and fire engulfed the door and area he entered. Crews from all three Napanee stations including mutual aid from Stone Mills and Mohawks for water supply was required to bring this fire under control. The interior crew who made the initial knock down were able to locate and rescue the dog who was later reunited with its owner once crews administered O2 through Pet O2 mask.”

The lone occupant of the home was assessed by EMS for burns sustained in the initial fire in the garage. He was released several hours later.