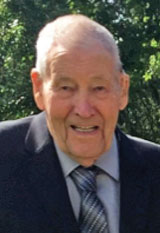 It is with great sadness that the family of Herman Kenneth Russell announces his passing on January 3, 2022 at 94 years young. Ken is predeceased by his wife of 65 years, Denise (nee Loiselle). He is lovingly remembered by his children, Marc (Sandy), Kenny (Barbara), Paul and Nancy (Peter). Ken is also remembered by his 9 grandchildren (his ‘whirlie girlies’ and ‘the boys’), and his 11 great-grandchildren, to whom he was fondly referred to as Grandpa or Big Poppa. Ken will be remembered as a loving, warm and kind Newfoundlander with a ready smile, a sharp wit and an appreciation for tall tales and a good laugh. A strong, intelligent and hard working ‘jack of all trades’, Ken spent his career as a hoisting engineer and millwright. While frugal with himself, Ken was generous with his time and always ready to lend a hand to family or a friend. In his later years, Ken devoted his time to his grandchildren, and then, in no order, his garden, walks in the park and any dog that was fortunate enough to cross his path. No funeral services will be held. Those who so desire may make donations in his memory to the Alzheimer’s Society. And to the team at Chelsey Park Nursing Home who took such great care of Ken for the last 2 years – a sincere ‘Thank You’.