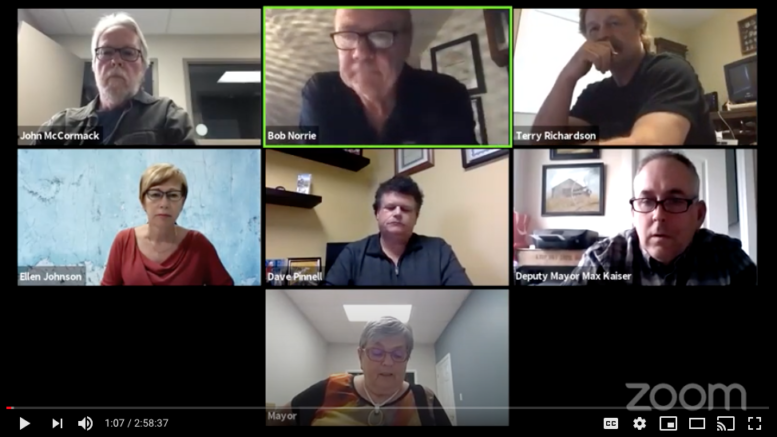 A pair of public meetings to discuss R.W. Tomlinson Group’s proposed permanent asphalt plant have been tentatively scheduled for Feb. 17 and 24, 2022.

In anticipation of high public interest in the meetings, coupled with the unknown status of Public health guidelines for February, Greater Napanee staff has proposed holding the Feb. 17 meeting virtually while the Feb. 24 meeting would be in person. The intent would be the in-person meeting would be reserved for those who are unable to connect to the virtual meeting.

Town of Greater Napanee’s general manager of growth and expansion Michael Nobes appeared before council on Dec. 14 to outline the options for the public meeting.

Council voted to direct staff to begin preparations for both meetings with the tentative dates of Feb. 17 and 24 with details to be finalized in the new year.

Staff is also working to create a ‘Bang the Table’ webpage for members of the public to access applicant submission materials such as studies and reports that have been conducted on the proposed project. Residents would also have the option of submitting questions.

-Greater Napanee council will consider a by-law to increase Napanee Cab Inc. rates and fares at their first meeting of the new year, held Jan. 11, 2022.

Those rates would meet the request made by Napanee Cab Inc. made back in 2020 but were never implemented. More recently Napanee Cab owner Ron Yeomans spoke at Dec. 16’s meeting, explaining why he’s now requesting rates and fares be increased by $1.50 for in-town (up from $12 to $13.50) and increase of 10 per cent for all other fares.

Yeomans cited the rising cost of insurance, gas and minimum wage increase as the reasoning behind the request.

Council voted to consider meeting Yeoman’s 2020 request at their next meeting and to further request financial information from the company to see if the jump to his more recent request can be justified. Town clerk Jessica Walters noted that while council can request to see financials, there is no obligation on the company’s part to provide them.

-Sticking with transportation, council voted to authorize a partnership between Loyalist Township and Greater Napanee to launch a pilot project of coordinated transportation service.

The project would include four stops in Greater Napanee, two in Loyalist, one in Westbrook and another at the Cataraqui Centre in Kingston.

Current funding for the project would allow it to run for two years.

“I think this is an excellent project for us to participate in, especially in light of the funding that we’re getting to start it and it will clearly be a situation of if people use it we will continue to be able to fund it but if they don’t use it we will likely lose it,” said councillor Ellen Johnson.

Current assumptions of the project are that it will utilize one accessible van with minimum 10 passenger seating, running five days a week. Estimated fare is $5 one way, $10 per ride.

Greater Napanee conducted a survey to determine the best times to run the service with two options emerging. The first is Monday-Friday, 5:30 a.m. to 5:30 p.m. The other is Monday, Wednesday, Friday and weekends.

Council voted to put out RFPs for the service and will determine the best times of use based on submitted proposals.

-In summarizing the Dec. 4 Parade of Lights, Kaiser noted over two tonnes of food were collected with an additional $4,000 in cash to be donated to the Napanee Salvation Army.