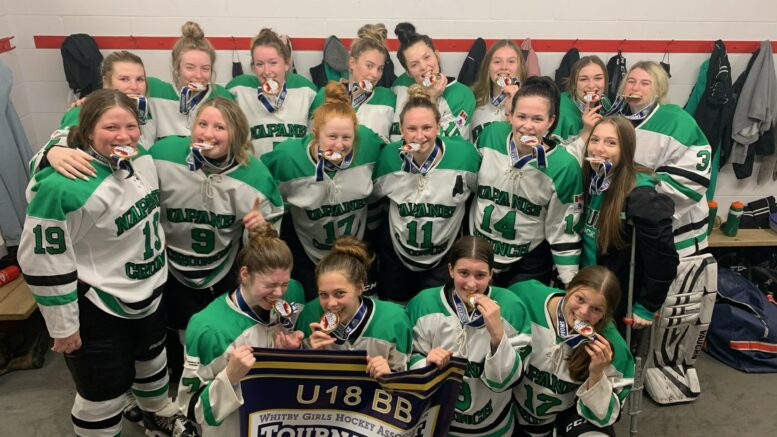 The U18 BB Crunch reeled off four straight wins, all shutouts, to take gold at the Whitby Tournament of Heroes. Submitted photo.

The U18 BB Crunch won the gold medal at the Whitby Wolves Tournament of Heroes over the weekend.

The third time is the charm for this team as they won silver medals in the last two tournaments. The tournament started off tough after the Crunch dropped the first game, 2-1 to the Central York Panthers.  Kristen Sutton scored the lone goal.  Game 2 was a 3-1 win over the Kanata Rangers on goals by Claire Whitney, Lila Pringle and Claire McConnell.  Saturday was a complete team effort in a 4-0 win over the Brampton Canadettes.  Peyton Hutcheson, Whitney, and Sydney Woodcock (two) scored for the Crunch.  Game 4 was a must win to push the Crunch into the semifinals and they did not disappoint with a 3-0 over the North York Storm.  Lila Pringle scored two and Sydney Woodcock scored the other.  This setup the semifinal matchup with the Brock Jr. Badgers.  The Crunch won 2-0 pushing them into a rematch with the Kanata Rangers for the gold medal.  Claire Whitney started off the scoring late in the first period.  Lila Pringle added the insurance marker early in the third period and then buried an empty netter to seal the deal, winning 3-0.  Meena Peterson had a record of 5 wins and 1 loss with four straight shutouts!

-The U11 BB Crunch Played in their first tournament of the season in Whitby.  They tied the first game, 1-1 with the Central York Panthers.  They lost the middle two games to the Belleville Bearcats and the Clarington Flames and then beat the host Wolves, 2-0.