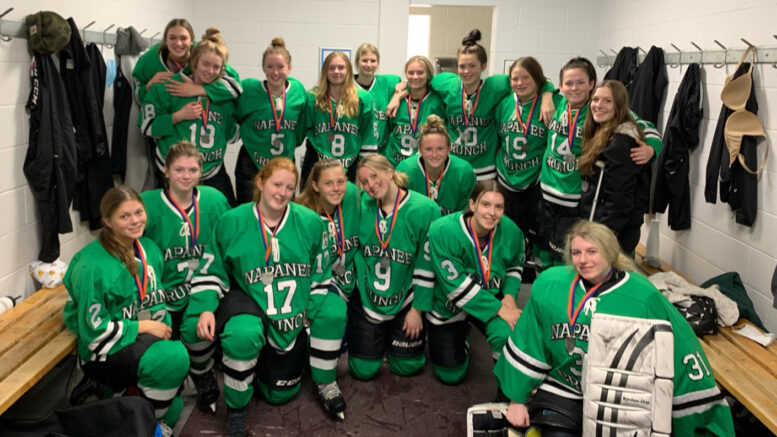 The Napanee U18 BB won the silver medal at the Kitchener Lady Rangers Fall Fest tournament this past weekend.

This makes two silvers on the season already.  They started off the tournament with a 2-1 win over the Cambridge Roadrunners then a 4-1 win over the Kincardine Kinucks. They faced their archrival, the Scarborough Sharks on Saturday and suffered a tough 3-1 loss setting up a must win game against the Ancaster Avalanche on Saturday evening. They handled them easily 3-0 with Meena Peterson earning the shutout.  They faced the undefeated Waterloo Ravens on Sunday morning in the semi-finals and held on for a 1-0 win. The rematch against the Scarborough Sharks would be no different as they lost a tough battle 3-0.

–The U11 BB Crunch won their first and second games of the season this weekend.  On Saturday, they beat the Whitby Wolves 3-1.  Lily Casselman, Shaye Brown and Alyvia Thompson scored for the home team.

Whitby came to Napanee on Sunday for the tail end of the home and home series and the home team did not disappoint in beating them 2-1.  Goal scores were Molly Alexander and Lily Casselman.  They will travel to Whitby next weekend for the tournament of heroes.

-The United Restaurant/McGuinness Water Solutions U13 BB defeated the Lindsay Lynx 3-0 on goals from Ryan DuChene, Ruby Marlow and Norah McGuinness. The lone assist was credited to Sophie Shortt. Yakowennare Brant earned the shutout. On Sunday, the Oshawa Lady Generals came to town and were handed a 5-0 defeat by the home team.  Goals scored by Averie Cole (two), Jocelyn Osborn (two) and Claire Jarmin.  Logan Smith earned the shutout for the home squad.

-The U13 B Crunch have now won three games in a row. They beat the Cold Creek Comets on Tuesday 4-3, then faced the Otonabee Wolverines on Thursday beating them 2-0 with goals from Neala Anger and Claire Clapp.  Assists came from Jordyn McCormick and Racehl Raney. Peyton Bowers earned the shutout. They then faced Cold Creek again on Sunday, winning 4-2.

-The U15 BB Crunch posted back-to-back shutout wins on the weekend.  On Saturday, they traveled to Peterborough to face the Ice Kats.  They won that one 3-0. Goal scorers were Emma Brummell, Sophie Fraser and Avery Fingland.

–The U18 B Crunch tied the Otonabee Wolverines 1-1 on Saturday.  Sarah Beaupre scored assisted by Karenna Ricketts and Molly Dafoe.