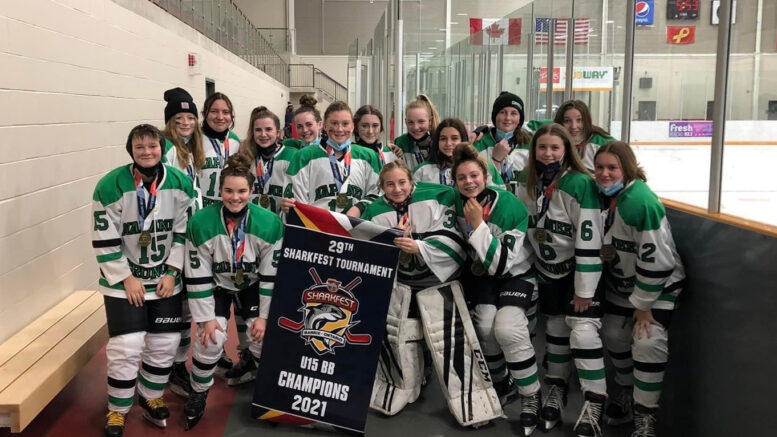 The United Restaurant/McGuinness Water Solutions U13 BB won the gold medal at the Barrie Sharkfest tournament this past weekend.  They opened the tournament with a 4-1 victory over the Sault Ste. Marie Greyhounds 4-1.  Goals came from Brooklyn Prevost, Kailee Jacklin, Averi Cole and Ryan DuChene. Assists from Mickara Cochrane, Sophie Shortt, Jocelyn Osborn, Norah McGuinness, Sarah DiFazio and Lexa Lazarakos. They then finished Friday with a 1-1 tie with the Haldimand Rivercats.  The goal was scored by Lexa Lazarakos assisted by Ruby Marlow. 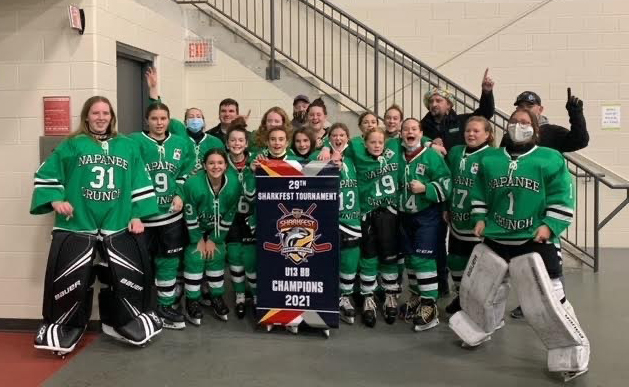 The U13 BB Crunch celebrate with the banner after placing first at the Barrie Sharkfest tournament. Submitted photo.

They then had a must win game to push them into the quarter-finals.  They did not disappoint, beating the Toronto Leaside Wildcats 6-0.  Brooklyn Prevost and Karleigh Wales scored a pair of goals each with Jocelyn Osborn and Averi Cole adding singles.  The next opponent didn’t fair much better as the Crunch came out flying against the Oakville Hornets handling them easily with a 5-0 win.  Logan Smith earned the shutout.  This setup a rematch against the Haldimand Rivercats and it proved to be a tight checking game.  It took a shootout to finish this one off to move on to the gold medal game with a 2-1 final.  Yakowennare Brant stood on her head for the win and Brooklyn Prevost scored the lone goal.  Lexa Lazarakos and Carley Uens scored in the shootout for the Crunch.

They then met the Greyhounds for a rematch in the final. The Crunch prevailed again, 3-1 to bring home the gold and a nice new banner.  Brooklyn Prevost was selected as the Avery Andrew Award winner for the tournament MVP.

-The U15 BB won the gold medal at the Barrie Sharkfest tournament.  Game 1 was a 0-0 tie with the Brock Badgers.  Game 2 was a 2-2 tie with the Oakville Hornets.  Game 3 was a 4-0 win over the Clearview Ice Cats.  They beat the North Halton Twisters, 2-1 in the quarter-finals.  They then beat the Sault Ste. Marie Greyhounds, 4-1 in the semi finals before besting the host Barrie Sharks, 3-1 in the gold medal game.

-The U18 BB Crunch won a double-header against the Whitby Wolves on Sunday. Game 1 was 5-0 with Meena Peterson earning the shutout with 17 saves.  Game 2 was a 2-1 win.

-The U18 B Crunch earned the silver medal this past weekend at the Barrie Sharkfest tournament.  They started off the tournament with a 3-1 win over the Collingwood Lightning.  Karenna Ricketts scored a pair of goals and Molly Dafoe added the other.  Assists from Maggie Munt, Nicole Geenevasen, Hayley Maracle and Stella Sutton.  Game 2 was a spirited back and forth game against the Branford Ice Cats.  The Crunch held on for a 2-2 tie.  Goals from Rickets and an Kirkpatrick.  Assists from Sutton and Geenevasen.  The Crunch secured their place in the gold medal game with a 4-0 win over the host Barrie Sharks in Game 3.  Geenevasen scored to start it off followed by Dafoe, Munt and Ricketts.  Assists went to Ricketts (two), Geenevasen, Munt, Sarah Beaupre and Grace Gavel.  The Crunch were bitten by a flu bug for Sunday’s finale and played with only nine skaters.  They lost a tough one, 3-2 to the Brantford Ice Kats.  Beaupre and Dafoe scored for the Crunch.