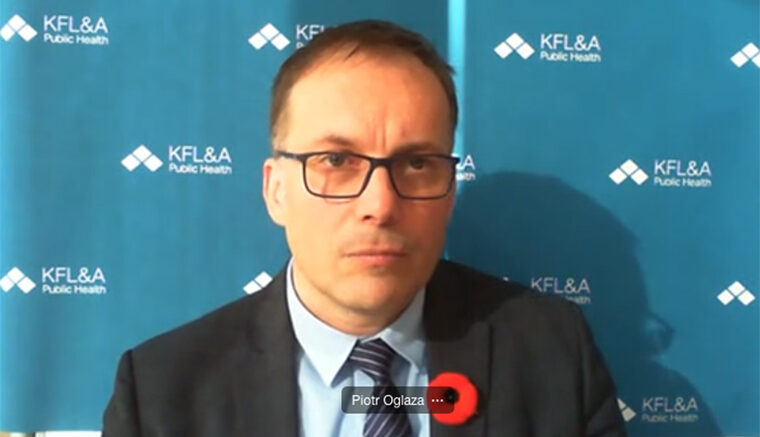 KFLA’s COVID-19 case count continues to climb to new highs but the region’s medical officer of health says a return to basics will help to get numbers back under control.

“Currently we have 126 active cases and close to 500 contacts that we are following,” said Oglaza. “Our (positivity) rate per 100,000 population in seven days is now 48.8 per cent. The significance of that number is it’s among the highest rates that we’ve even seen in KFLA.”

Those numbers are particularly concerning when coupled with the fact the rate of testing has declined as the number of positive cases have climbed.

“At this point we are testing about 1.6 per cent of the population a week,” said Oglaza. “That’s the metric we use to determine how many people are seeking testing in this area. This is also a number that’s lower than the testing rates we had during the second and third wave. The importance of this is we want to remind individuals and people residing in KFLA to please get tested and isolate if you get symptoms. That’s going to help us get a handle on this surge.”

Though the recent surge is cause for concern, Oglaza said most of the community has done its part to help mitigate the worst of the damage.

“Because of our high vaccination rate, because of the work that everyone’s done in the community, immunizing the public and because of the confidence and the willingness of the population of the KFLA region to get immunized, this fourth wave that we are experiencing now, this surge in the fourth wave is more like a tidal wave as opposed to a tsunami,” said Oglaza. “We’ve seen that in other jurisdictions where the fourth wave turns into a tsunami when there is large numbers of people unvaccinated. Fortunately in our region the vast majority of individuals are fully immunized. We are 86.4 per cent fully vaccinated and 89.8 per cent of those who just received their first dose. Our immunization uptake is very high. I would like to see it even higher. I would like to see the numbers in the 90s for fully immunized. But even with the numbers that we have, that offers us significant protection against the serious impact of the fourth wave on the health of the population.”

Oglaza said the numbers show the vaccine is having a positive effect.

“It’s important to note for the public that over the past 30 days when we look at our rate of cases in the unvaccinated population versus the vaccinated population, it’s about six times greater in the unvaccinated,” said Oglaza. “That is one indicator that confirms what we’ve been communicating all along that vaccines do work and provide a significant relief in the situation.”

Currently there are seven total outbreaks across KFLA, four of which are within a school setting. Of the reported cases, there is a known epidemiological link for about 75 per cent of them. Five people are currently in local hospitals due to COVID-19, two of which are in the ICU,

Given how well the community had been doing as of late September, Oglaza notes the latest slide could be demoralizing for residents. He stressed the importance of following Public Health measures to get through the current spike.

“Unfortunately we are dealing with a surge and the fourth wave was predicted in the past looking at the modeling, but we know that the magnitude of that fourth wave is fortunately less than the worse case scenario that were contemplated in the past,” said Oglaza. “It’s also important to know that the impact of that fourth wave is significantly reduced because of the high vaccination rate. Because of this caveats and all of that background, we are hoping that that fourth wave will be relatively manageable but we still need to be mindful of the basics. Maybe some individuals in the community might be thinking perhaps there’s no need for that vigilance, I would urge everyone to still take this virus very seriously. It’s been communicated by my very experienced colleagues that we all need to be mindful and humble in the face of this virus. This virus has the tendency to surprise us and to in a way exceed our expectations at times. We need to be vigilant. We need to be humble, we need to go back to basics. We’ve done this as a community many times over and I fully understand that everyone is fatigued at this point. But it is hopefully the final stretch where we need to be dealing with this surge over the course of the cold and flu season this year.”

-Stay home, isolate, and get tested if you have any symptoms of COVID-19.