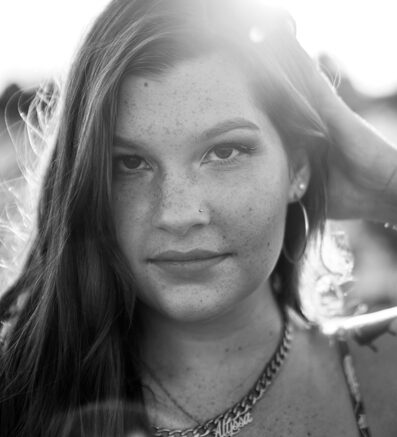 Alyssa Keen has turned heartache into art for her debut album No More Sad Songs.

The 23-year-old Centerville native and NDSS graduate travelled to Europe earlier this summer to record the album, which she plans to release in full next month.

“It was definitely terrifying,” Keen recalled of making the leap to travel half way around the world to make her album. “It was my first big trip on my own. I was there for three weeks. It was a lot to go and do this thing by myself and secondly to have invested all of my life savings on flights and on a rental to stay at while I was there. It was a big mental and physical investment. It was definitely a lot of work, it was much harder than I thought it was going to be. It was like all work and no play. My voice has never been so strained in my whole life. It was constant writing and singing. Every minute of every day was just music. There’s a couple songs on my album that I wrote and was recorded within a couple days while I was there. It was a very fast moving process and lots of multi tasking. It was definitely very challenging but in the end worth it for sure.”

Keen made the album at the suggestion of a Netherlands-based producer known as Nickay, who discovered her musical talents through Instagram. After several months of Facetiming, Keen flew to the Netherlands to record, with Nickay serving as her producer.

Keen drew up life experiences when writing her songs, everything from breakups to her parents splitting up.

“It’s all very real and open,” said Keen. “Part of me is nervous for the album to come out because it’s literally just me laying all my cards out on the table and totally opening myself up for the world. But the biggest thing with the album was just me trying to take negative situations and kind of turn them around and give them a happier twist and see the brighter side of things. The album title is No More Sad Songs. It was basically me taking all of my sad situations and all of my negative experiences and making them happy. This album was kind of me closing that chapter of my life so I can be able to move forward and be happier.”

Keen described her music as Lo-Fi Pop, which she says is very chill and relaxing.

She’s released two singles ahead of the full album, the first being Thanks, But No Thanks in August followed by Blame It On My Luck last month. Her music is available on all streaming platforms such as Spotify and Apple Music. She’s currently working with a Toronto based label and will look to play live shows in the new year in support of the full release.