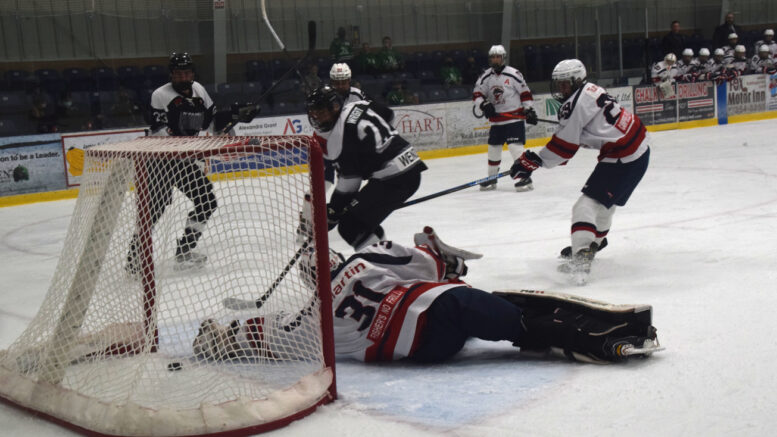 Napanee's Johnny Wright slides the puck passed a sprawled out Eric Martin to knot the game at 2-2 during Friday's match at the SPC. Photo by Adam Prudhomme.

It was all treats and no tricks for the Napanee Raiders this weekend as they picked up two wins to cap off a perfect month of October and push their record to 10-0.

Hosting the Campbellford Rebels on Friday the Raiders skated to a 6-2 victory before picking up a 4-1 win in their first visit to Frankford on Saturday.

Making his return between the pipes for the first time since leaving midway through the Oct. 14 game against Picton, Napanee’s Bailey Maracle showed no signs of rust Saturday night against the Huskies. The net minder was closing in on a shutout before Frankford’s Parker Mattis scored at the 18:17 mark of the third period. The goal was much too little, much too late however as the Raiders held a 4-0 advantage at the time and held on for the 4-1 win.

AJ Hess opened the scoring for Napanee at the 2:47 mark of the second period, his first of the season. Isaac Brown and Reid Lambert picked up assists on the play. Ben Chubbs scored late in the middle frame to double the lead with help from Matthew Sheehy and Soren Zamuner.

Those two assistants would pick up goals of their own in the third with Zamuner finding the back of the net at the 13:13 mark of the period followed just over two minutes later by Sheehy.

The Huskies finished the night with 20 shots. The Raiders meanwhile controlled the pace of the game, firing 38 pucks at Hayden Candler. Eric Martin of the Campbellford Rebels swats the puck away with his stick during Friday’s game at the SPC. Photo by Adam Prudhomme.

Friday night against the Rebels the Raiders had to play a little catch up, rallying from deficits of 1-0 and 2-1 before rolling to the 6-2 victory.

Aidan Treverton scored 1:43 into the game for the visitors.

That lead held through the midway point of the period before Lambert knotted things at 1-1 with his sixth of the season and first of two on the night.

Adam Klass restored the Rebels’ lead just 47 seconds later, but it would be all Napanee the rest of the way with five unanswered goals.

Johnny Wright scored at 14:20 and Lambert potted the eventual game winner with under two minutes to go in the second.

Logan White, Rheydan McCoy and Wright each added a goal in the second to secure the win.

Mitch Bown picked up the win with 32 saves on the night. Despite being outscored by a ratio of three-to-one, the Rebels outshot Napanee 34-28 on the night.

Napanee will look to keep their perfect record intact when they welcome the Amherstview Jets to the SPC tomorrow night for a 7:30 p.m. puck drop.

Napanee comes into the game six points up on the second place Jets who are 7-2 on the year (14 points). Their only two losses this year have been at the hands of the Raiders.

The Picton Pirates sit third in the Tod Division standings at 5-4 (10 points), followed by the Port Hope Panthers (3-6-1, seven points) and the Rebels (3-6, six points). The Huskies are still searching for their first win at 0-8-1.