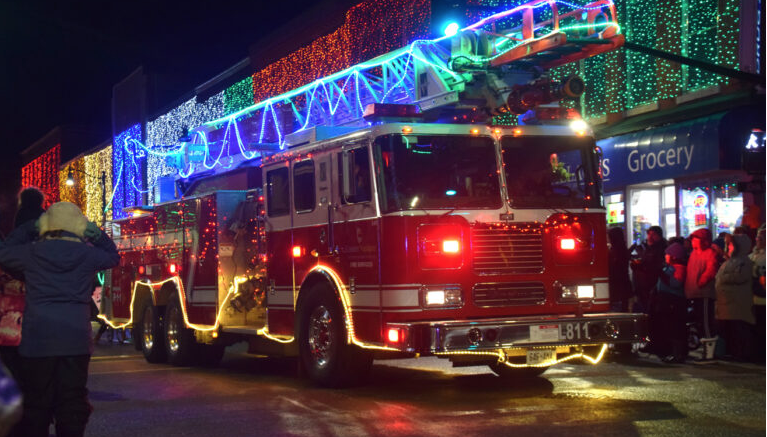 A GNES fire truck lit up during the 2019 Parade of Lights. Photo by Adam Prudhomme.

Santa Claus may just be coming to town after all.

Just days after Greater Napanee announced the annual Parade of Lights wouldn’t be taking place in 2021, deputy mayor Max Kaiser gave hope for a revival. Speaking at the Oct. 26 council meeting, Kaiser put forward a successful motion that the town seek volunteers from community groups to organize a parade to take place on Dec. 4.

The town had originally cancelled the parade at the suggestion of KFLA Public Health, who had recommended large outdoor gatherings not take place.

“I’ve had discussions with (Town of Greater Napanee general manager of community and corporate services Brandt) Zatterberg and as of a week ago our Health Unit said that is was not recommending,” said Kaiser. “My position, and I think I said it either at the budget meeting last week or at the council meeting prior, that I didn’t see how a few thousand people gathering along two miles of road frontage was in the same category as 6,000 people sitting in the K-Rock Centre watching a hockey game. Especially since people that are elbow to elbow are more likely to be familiar for the parade than at the hockey game…I will be glad to point out that last year, and I heard this response that we had no parade, I took it upon myself to organize a few individuals to just drive around and shed a little spirit. It wasn’t a parade, it was just a procession of tractors lit up to share some spirit and it was well received, by most. Even those that did not receive it that well were speaking mostly to the restrictions that we had at the time.”

Kaiser also noted neighbouring communities such as Sydenham, Gananoque and Belleville were planning parades and added he suspected Kingston would reverse their decision and hold one as well. He’s also heard rumblings that if the town doesn’t host a parade, members of the community have said they would put one on themselves.

“I think it’d be better for the safety and everything of the whole community if we had a sanctioned parade,” said Kaiser. “Even if it’s volunteer driven and volunteer run. We can maybe restrict it to a little bit smaller. We were up over 100 floats two years ago. Maybe it doesn’t need to be anywhere near that big. Maybe we can keep it a little bit more locally themed and locally orchestrated and what not. I would very much like to see that event continue this year in our community.”

Councillor Dave Pinnell, who has helped organize the parade in previous years even before joining council, agreed. He said he too would assist Kaiser in doing anything he could to bring the event back.

“What I learned from last week’s haunted walk is that if you put it out there, they will come,” added councillor Terry Richardson. “I think we may be pleasantly surprised if we put the effort out there. With all due respect, if it ends up being a police car in front and Santa Claus in the back, I’m good with that. But I think you’re going to be pleasantly surprise with what can be put together in a very short amount of time. I think the community deserves it and I think the kids deserve it. I’ve got a five-year-old granddaughter that was asking me about it today so I’m very supportive.”

The town will now endeavor to partner with community groups over the next month to organize the parade. Mayor Marg Isbester also noted volunteers are also needed to assist with the installation of the town’s big bright lights, which serves as the backdrop for the parade route.

More information of the parade is expected to be made public in the coming days as the details are finalized.