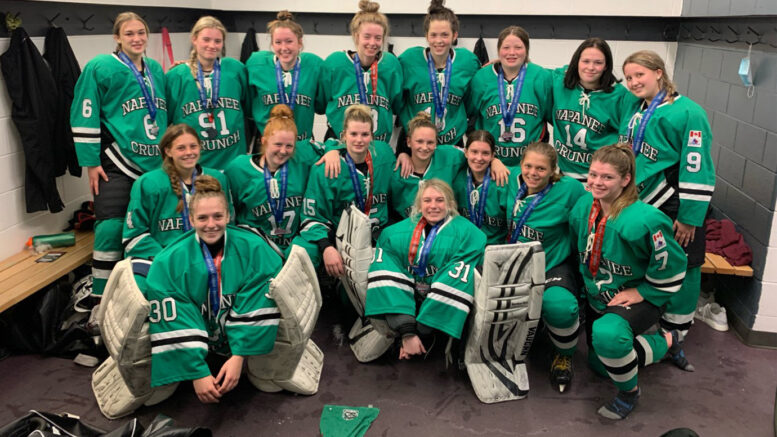 The Napanee U18 Crunch battled into overtime of the finals, earning silver at the Oshawa Lady Generals FallFest. Submitted photo.

The Napanee U18 Crunch had a successful return to meaningful hockey this weekend, capturing silver in the Oshawa Lady Generals FallFest tournament.

Napanee battled hard in the gold medal game, going to overtime with the Leaside Wildcats (#3758). Keyra Herrington was solid in net making 33 saves to hold onto the 1-1 tie through regulation and force overtime.  Halle Woodcock was rewarded with a well deserved goal assisted from Huntyr Haines.  The Wildcat attack was relentless though and they prevailed in overtime on the power-play.

The Crunch beat the Leaside Wildcats (#3774) 1-0 to start the tournament.  Meena Peterson earned the shutout.

The Crunch then lost a tough battle against the Scarborough Sharks, 4-2 with an empty netter.
Game 3 was a 5-0 win against the Haldimand Rivercats.  Peterson was in goal again for the shutout.
Game 4 was a must win for the Crunch and they did not disappoint in beating the Brampton Canadettes 2-0.  Herrington was in goal for the shutout.
This put the Crunch in the semi finals on Sunday morning.  They won a tough game against the Durham West Lightning, 2-1. Woodcock was a beast in this game, killing several minutes of penalties and winning three-on-one battles in the opposing teams’ end which didn’t allow them to get setup on the power-play.

That win advanced the Crunch to the gold medal game. After nearly two years off of playing meaningful hockey games, a silver finish was a great way to open the season.